The oceanic balance of the micronutrient zinc (Zn) is getting more puzzling –although better documented- while the Zn isotope data set increases. Presenting the first high resolution section of seawater dissolved Zn concentration and Zn isotope ratios (δ66Zn) from the North Atlantic, Conway and John (2014, see reference below) confirm that the deep ocean is fairly homogeneous for δ66Zn, close to +0.5‰, except near local North Atlantic sources of Zn (margins, the Mediterranean Sea, hydrothermal vents) where it is isotopically lighter.

Balancing the Zn isotopic budget raises questions. Indeed, the known inputs of this element (continental, riverine, and aerosol) display δ66Zn ranging between 0 and +0.3‰ while the known outputs (carbonates, ferromanganese nodules, and ferromanganese crusts) are isotopically heavier (+0.9 to +1‰). As previously suggested by Little et al. (2014, see also highlight about it), an isotopically light sink is therefore missing. The authors suggest that burial of biogenic Zn in sediments might be this important sink. They also suggest a potential role for zinc sulfide (ZnS) precipitation in low-oxygen open-ocean waters as a possible light sink, analogous to recent studies on Cd (Janssen et al., 2014, see also highlight about it). 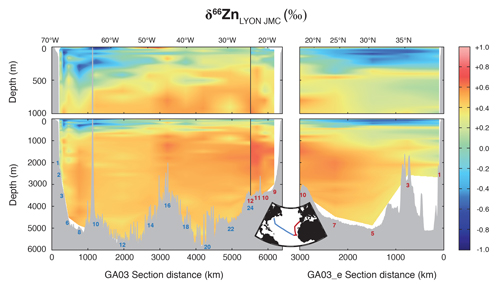 Figure. Distribution of dissolved stable Zn isotope ratios (δ66Zn) for the US GEOTRACES North Atlantic GA03 and GA03_e sections. δ66Zn is expressed relative to JMC Lyon standard. Station numbers are shown for 2010 (USGT10, red) and 2011 (USGT11, blue). The black vertical line denotes the crossover between the cruises at USGT10-12 and USGT11-24. Click here to view the figure larger.