The dissolved Rare Earth Elements (dREE) data discussed by Zheng and co-workers (2016, see reference below) have been collected along a full depth section at 12°S in the South Atlantic Ocean, using a new high-precision analytical protocol (Zheng et al., 2015).

Results show that more than 75% of the dREE concentrations are preformed, explaining the strong correlation often observed in deep waters between dREEs and dissolved silicon (Si).

Minor addition of up to 10% of dREE in Antarctic Bottom Water (AABW) in the deep Brazil Basin is observed, reflecting particle remineralization, while dREE addition of up to 25% is found at 1500 m and below 4000 m in the Angola Basin near the continent–ocean interface. These latest inputs are divided in 2 plumes: based on evidence from cerium anomalies, the shallow plume is attributed to release of dREEs from dissolution of sedimentary iron oxides on the continental margin, and the deep one to remineralization of calcite.

…if you wish to know more about the process identification, don’t hesitate to read the paper!!! 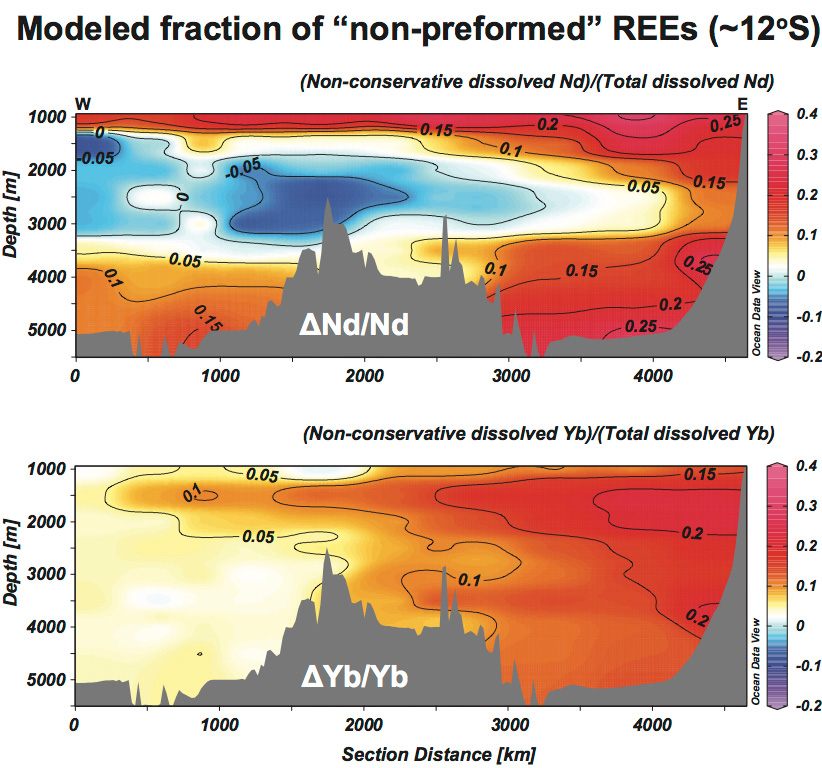 Figure: The multi-parameter mixing model reveals that >75% of dissolved REEs in the deep South Atlantic along ~12ºS is explained by mixing of different water masses (“preformed”), and significant (up to 25%) non-preformed REEs occur at ~1500 m and below 4000 m at the ocean-continent interface in the Angola Basin (eastern section) resulting from different REE sources. Click here to view the figure larger.