Assessing the processes leading to dissolved iron (dFe) isotope fractionation in a hydrothermal plume is a key question, because it allows a better characterization of this specific source of dFe in the deep ocean. For the first time, Fe isotope composition of dissolved and total dissolvable Fe fractions was determined and compared to the bulk chemical composition of Fe particles.

These complementary papers demonstrate that the dFe isotopic composition observed at the end of the plume dispersion in the deep seawater is quite different from that of the pure fluid. Changes of this signature reflect redox processes, ligand complexation, exchanges with labile particulate Fe. They more specifically reveal that the proportions of authigenic Fe-sulfide and Fe-oxyhydroxide minerals that precipitate in the buoyant plume exert opposing control on the resultant isotopic signature of dFe found in the neutrally buoyant plume.

Although the isotopic composition of stabilized hydrothermal dFe in the East Scotia Sea is distinct from background seawater and may be used to quantify the hydrothermal dFe input to the ocean interior, these studies underline the fact that the multiple processes occurring during the early stages of the plume depend on the nature of the ridge substrate, more specifically its sulfur (S) content. The potentially highly variable isotopic signature of hydrothermal dFe is an important consideration for the mass balance of dFe in the modern ocean and for using Fe isotopes to infer changes in the Fe cycle throughout past Earth history… 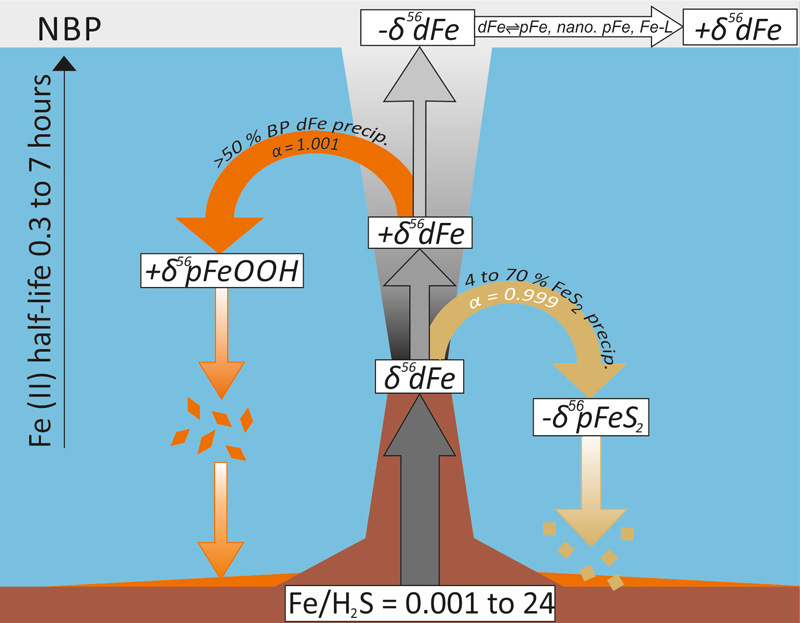