Filippova and co-authors (2017, see reference below) show distinct water mass signatures in the Labrador Sea revealed by combined dissolved hafnium (Hf) and neodymium (Nd) isotope compositions and REE distribution patterns along the AR7W transect in May 2013.

The new data show that in a semi-enclosed basin such as the Labrador Sea, the radiogenic Hf isotope signatures can serve as a highly sensitive tracer of water mass mixing processes given that they allow distinction of particular water masses that do not differ in their Nd isotope compositions. Based on the new data, the authors suggest that the residence time of Hf in the Labrador Sea can only be on the order of decades in order to sustain the observed variability. The high sensitivity of Hf isotopes to decadal ocean circulation changes in the Labrador Sea suggests a potential prospect for their application in other restricted basins with similar geological settings and pronounced short-term hydrographic variability. 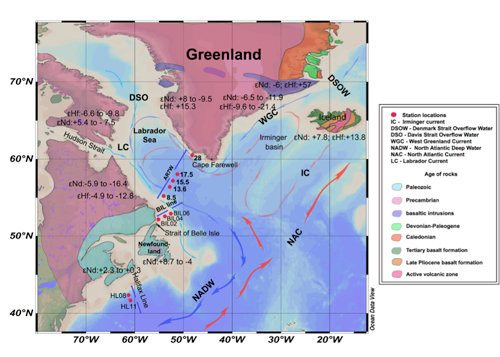 Figures: (top) Schematic map of the study area. Blue arrows represent cold deep currents and red arrows denote warm surface currents. Red dots indicate the positions of the stations occupied during CCGS Hudson Cruise 2013. A schematic representation of the geology of the surrounding landmasses is shown and includes average ɛHf and ɛNd values of the rocks. Please click here to view the figure larger. (bottom) Water masses distribution versus depth in the Labrador Sea based on their ɛNd (A) and ɛHf (B) signatures. Please click here to view the figure larger.