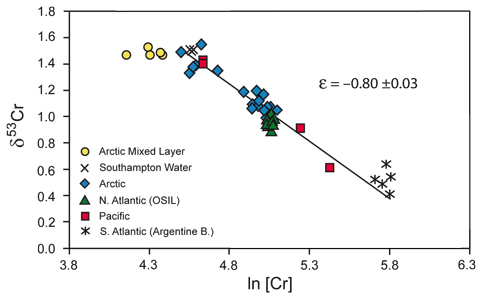 Figure: Correlation between chromium concentration (as ln[Cr]) and δ53Cr (‰) illustrates that samples from several locations around the world plot on a line that is consistent with closed-system Raleigh fractionation. This fractionation is probably the result of reduction of Cr(VI) is shallow and surface waters, and oxygen minimum zones, and possible reoxidation of Cr(III) at depth; observationally, Cr is “added” at depth, resulting in higher concentrations and lower δ53Cr values, and is “removed” in the surface, resulting in lower concentrations and higher d53Cr values. Click here to view the figure larger.