New revelations on the land-ocean flux of chemical elements are presented in two different papers highlighting the value of the ocean isotopic data. Both works reveal that the present quantification of the oceanic cycle of the chemical elements need to be revisited…a big question to dig in!

An extensive review of our present understanding and quantification of the oceanic budgets of the elements is proposed by Jeandel & Oelkers (2015, see reference below). Thanks to the international GEOTRACES programme (among others) isotopic data are currently acquired in the ocean and in its tributaries (rivers, estuaries…). Isotopes provide additional constraints to the oceanic budgets of the chemical species, and often reveal that these budgets are imbalanced. While this was already demonstrated for radiogenic Sr and Nd isotopes, recent data on Mo, Zn, Ni, Fe isotopes show that their budgets are also imbalanced. Since the processes yielding this disequilibrium are not clear yet, the possibility of an under-estimated input term has to be considered. The authors suggest that the term that would close the ocean isotope budgets could be, as for Nd and Sr, the dissolution of particles of terrigeneous origin. 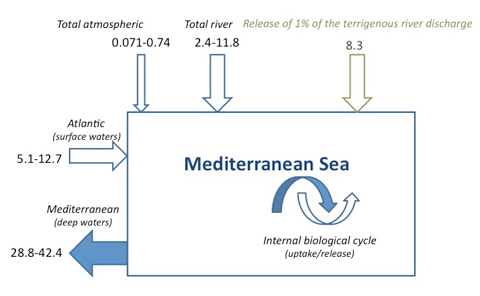 Figure: Dissolved Si budget of the Mediterranean Sea, in 1010 mol/year (Ribera d’Alcala et al., 2003; Durrieu de Madron et al., 2009; Jeandel et Oelkers, 2015). It is estimated that 28.8 to 42.4 x 1010 mol/year of Si are released from the Mediterranean Sea to the Atlantic Ocean, but only 5.1 to 12.7 x 1010 mol/year are returned. It is not possible to balance this flux by considering dissolved river and atmospheric inputs alone. The authors suggest it requires the input from the dissolution of continentally derived particulates.

Despite their potential importance as suppliers of nutrients, trace elements, and radionuclides to the coastal ocean, Submarine Groundwater Discharges (SGD) are still poorly quantified. Kwon and his colleagues (2015, see reference below) applied an inverse model to a global compilation of 228Ra data (getting broader with time thanks to the ongoing GEOTRACES cruises). This approach allows revealing that the SGD integrated over the Atlantic and Indo-Pacific Oceans between 60°S and 70°N is 3 to 4 times greater than the freshwater fluxes into the oceans by rivers!  Therefore, the authors strongly suggest that SGD is the dominant pathway for dissolved terrestrial materials to the global ocean, urging the community to revise the oceanic budgets of chemical elements including carbon. 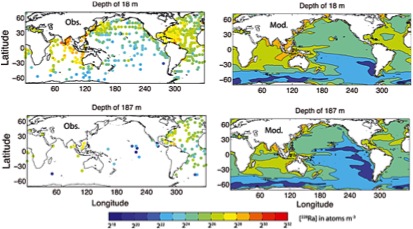 Figure: The distributions of 228Ra in the global ocean between 60°S and 70°N. Two representative model depths of 18 and 187 m are chosen to show the distributions at the surface and within the thermocline. Observations are shown with dots on the left panels. The observations are taken from a depth range of ±50 m. Simulated 228Ra concentrations are shown in color shading on the right panels. Unit is in atoms m3 with a conversion factor of 1 dpm = 4.36 × 106 atoms. Note that the color scale is made in a log scale with a base of 2 (i.e., log2[228Ra]) to increase the visual effect.