Thanks to the compilation of thorium-230 (230Th) and protactinium-231 (231Pa) data obtained along north-south and east-west transoceanic sections (in the Atlantic and Pacific Oceans), Hayes and co-workers (2015, see reference below) enlighten the processes at play among the lifestyles of marine particles, namely the adsorption to particles (scavenging) of these tracers. This systematic study is of first importance because both tracers are useful chronometers of particle dynamics and can be used to predict the adsorption of other insoluble trace metals in the water column. They find a widespread impact of authigenic Fe/Mn hydroxides as major scavenging phases (be it of hydrothermal or deposited sediment origin). They also show that biogenic opal is not a major scavenging phase due to the low abundance of opal in the water column. They eventually discuss why the distribution coefficients are surprisingly low in surface water, but if you wish to know more…read it! 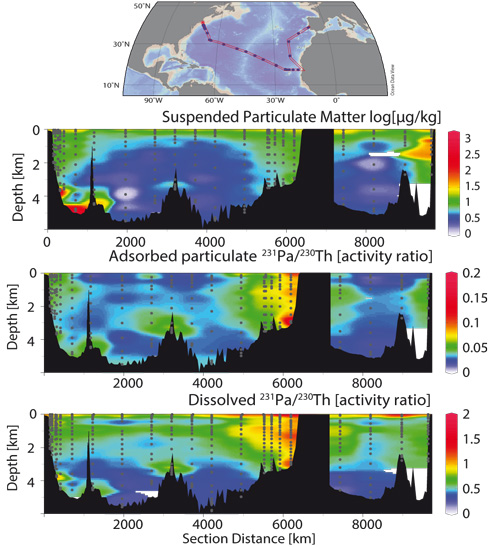 Figure: With samples from the U.S. North Atlantic Zonal Transects (upper map), we investigated how the radionuclides Th and Pa “stick” onto particles by analyzing their dissolved (bottom section) and particulate (middle section) phases in seawater, along with the amount and chemical composition of the particles. The ratio of Pa to Th in ocean sediments can be used as a proxy for properties of the ocean’s geologic past, but this ratio fundamentally depends on the relative intensity of each metal’s “stickiness” or tendency to adsorb onto various particles. Among many observations, we found the Pa/Th ratio was largely driven by the total amount of particles (top section) but was also significantly affected by a relatively minor mineral phase, the iron-manganese oxides forming at the Mid-Atlantic ridge and in West African margin sediments. Click here to view the image larger.