For the first time, a numerical study proposes the simulation of the anthropogenic tritium (3H) invasion as well as the distribution of its decay product helium-3 (3He) using a high-resolution regional circulation model (NEMO 1/12). Comparison with the numerous set of data acquired in the framework of different Mediterranean Sea transects conducted on the last 50 years underline the good performances of the model in simulating the Mediterranean Sea thermohaline circulation, and more specifically, the Eastern Mediterranean Transient (EMT), the intermediate water ventilation and the transports following winter convection in the Gulf of Lions. Contrastingly, the Adriatic Deep Water formation, as well as, the Western Deep Water propagation are too weakly reproduced while the Levantine Intermediate Water is too strong in the eastern basin. These results demonstrate how fruitful are such coupling between geochemical tracers and circulation models. 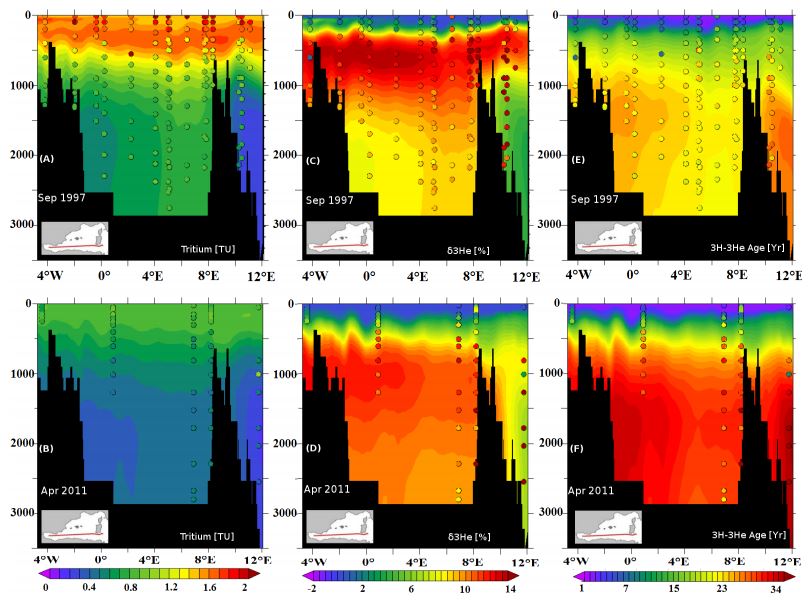 Figure: The tracer simulation together with observations made during the Poseidon 234 and Meteor 84/3 cruises in 1997 and 2011, has allowed to evaluate the formation of deep water and its associated temporal and spatial variability, and to study its impact on the deep water mass renewal over the basin: The same vertical gradient of tritium observed in 1997 is marked in 2011 in the WMed, with lower concentrations in the water column following the drastic reduction of tritium in the atmosphere after the stopping of the atmospheric nuclear weapons testing. Helium-3 maximum in LIW is deeper (about 1000 m) in 2011, with a significant accumulation of helium-3 in the deep water compared to 1997, which is due to continued tritium decay on the way. This evolution of the tracer signals was successfully simulated by the model indicating that the conversion of LIW in the western basin is well simulated.