Siderophores are organic compounds secreted by microbes to facilitate iron uptake. Using new methods to characterize trace metal organic ligands in seawater, Boiteau and colleagues (2016, see reference below) measured the distribution of siderophores along the US East Pacific Zonal Transect (EPZT; GEOTRACES GP16). The cruise track crossed from the highly productive Peruvian coastal upwelling region into the oligotrophic central gyre. The study revealed important changes in siderophore composition and concentration across different nutrient regimes (see figure below). Siderophores were found to be nine times more abundant in the most iron-depleted areas of the transect compared to the iron-rich coastal zone. Companion phylogenetic analysis of siderophore synthesis genes in the TARA Oceans metagenomic catalogue led Boiteau and co-workers to suggest that lateral transfer of siderophore synthesis genes help microbes adapt to low iron conditions found in many regions of the ocean. 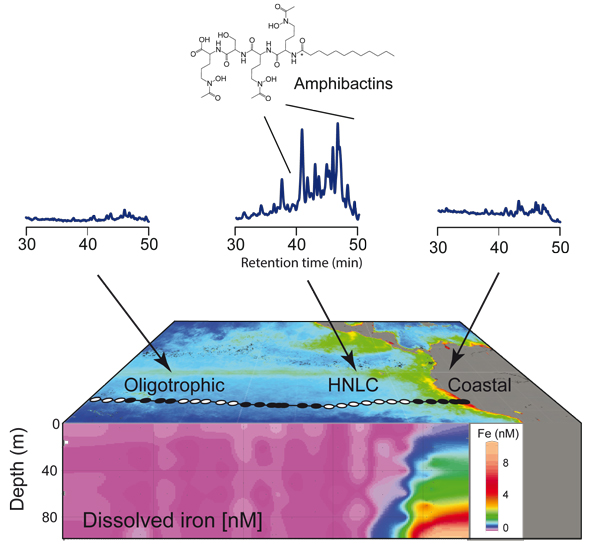 Figure: Distribution of siderophores across the GEOTRACES EPZT. Amphibactin siderophores (top panel) appear as peaks in the trace of organic iron isolated from seawater (middle panels). Each peak represents a different molecular form of amphibactin. Concentrations of amphibactins across the ETPZ were low in the high iron coastal region, high in the HNLC region, and low again in the low iron oligotraphic region (lower panel). Please click here to view the figure larger.