Understanding persistent high levels of mercury in arctic biota has been an elusive goal for nearly two decades. Little is known about where exactly inorganic Hg inputs into the Arctic generate the toxic methylmercury (MeHg) form that bioaccumulates in biota. Lars-Eric Heimbürger and colleagues (2015, see reference below) present the first full-depth high resolution profiles (> 5200 m-depth) of total mercury (tHg) and MeHg in the central Arctic Ocean (79-90°N). MeHg maxima occur in the pycnocline waters, although noticeably shallower than in the other oceans (150 m in the Arctic versus roughly 1000 m in the Atlantic). These shallow maxima are probably due to the accumulation of settling biogenic particles slowed down by the strong density barrier of the arctic pycnocline, which in turn will favor their microbial degradation and MeHg production. The shallow MeHg maxima likely result in enhanced biological uptake at the base of the marine food web, yielding elevated MeHg levels in Arctic wildlife. For this study the authors developed a new double isotope-dilution MeHg detection method with exceptional precision and low detection limit. These new findings will be guide future Arctic Hg research, notably the international Arctic GEOTRACES multi-ship survey planned for summer 2015 by American, Canadian and German teams. 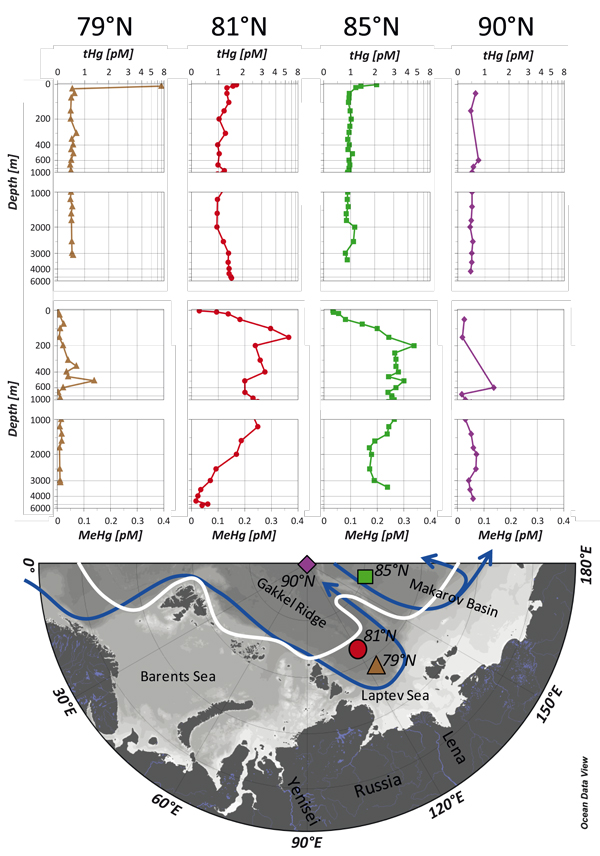