While it is confirmed that radium-226 (226Ra) is an interesting tracer of the water masses encountered along the GP16 US East Pacific Zonal Transect (EPZT) section cruise, 228Ra data coupled to the dissolved iron (Fe), cobalt (Co) and manganese (Mn) ones provide evidence that lateral transport of sediments from continental margins, including shelves and slopes, play an important role in open ocean trace elements and isotopes (TEI) budgets and biogeochemistry.

Indeed, elevated 228Ra activities were measured in the upper 200 m over the entire transect, a distance of 8500 km, as a result of sedimentary inputs from the continental shelf. In addition, a deep 228Ra plume was observed at ~1000–2500 m as far as 600 km away from the margin.

Linear dissolved Mn/228Ra relationship is observed both in shelf and offshore surface waters, suggesting that shelf sediments were likely the main source of dissolved Mn to the upper ocean. A linear dissolved Co/228Ra relationship was also observed in surface waters off Peru but no specific dissolved Co/228Ra trend was seen in shelf waters underlining the more complex behavior of Co in this area. Finally, the dissolved Fe/228Ra gradient suggests a rapid removal of Fe.

These results evidence again the important yet underappreciated role of continental slopes as sedimentary TEI sources to the deep ocean. 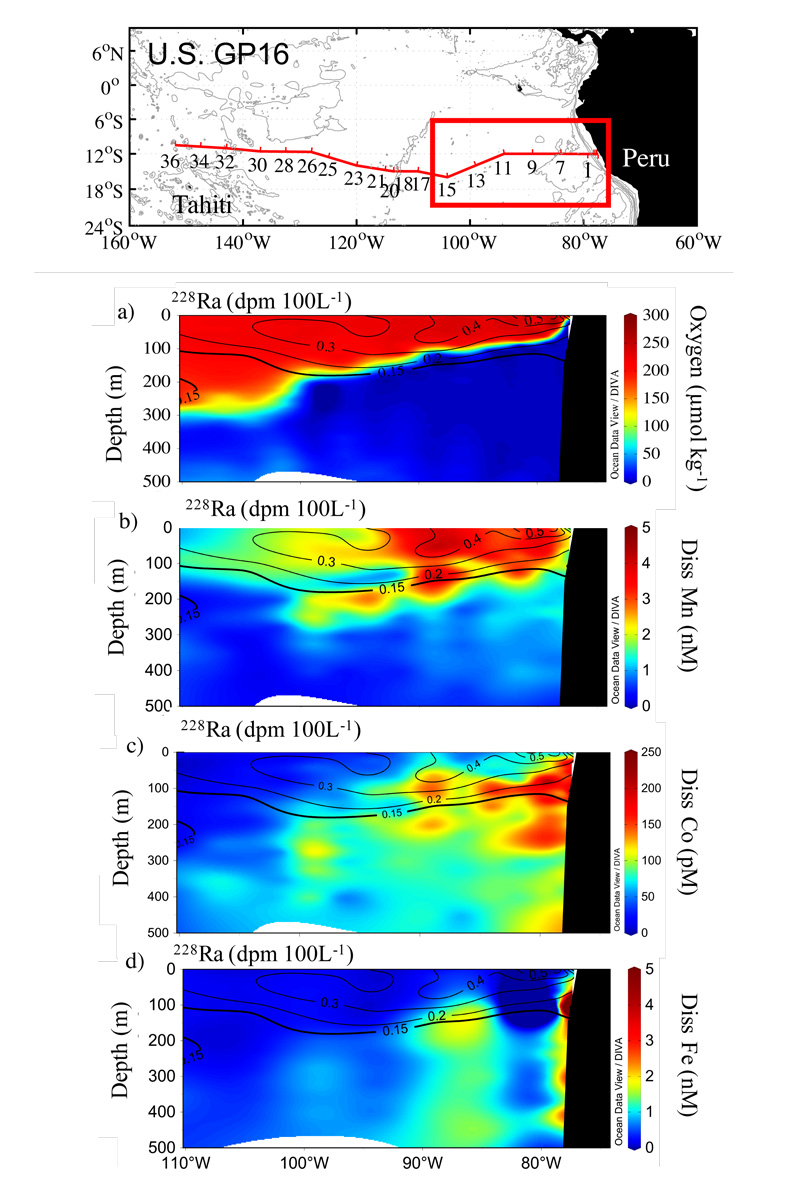 Figure: The US GEOTRACES GP16 cruise took place between Peru and Tahiti on Oct-Dec 2013. This paper focused on the first half of the transect highlighted by the red box. The concentrations of oxygen, dissolved manganese (Mn), dissolved cobalt (Co), and dissolved Fe (Fe) of the first 500 m of the water column are shown below. The radium-228 activities represented by the black contours were elevated at the surface and coincided with high concentrations of trace elements, especially of Mn, suggesting a common sedimentary source from the Peruvian continental shelf. Click here to view the figure larger.