The four radium (Ra) isotopes (224Ra, 223Ra, 228Ra, 226Ra, “radium quartet”) are produced in situ via decay of their insoluble  thorium isotope parents in sediments from the continental margins and deep-sea and then released to the ocean. In the ocean, their distributions are controlled by particle removal (226Ra) and radioactive decay with four different half-lives. These properties make the “quartet” an invaluable tracer of coast-to-ocean processes and a water mass spreading chronometer.

Thanks to a dense and beautiful data set documenting the radium quartet along the 30°N GEOTRACES US section (GA03), Charette and co-authors (2015, see reference below) were able to identify:

Last but not least, they conclude that the 228Ra inventories in the upper water column have remained constant over the past 40 years, which suggests that submarine groundwater discharge (the primary 228Ra source) is steady-state for the North Atlantic on decadal time scales. 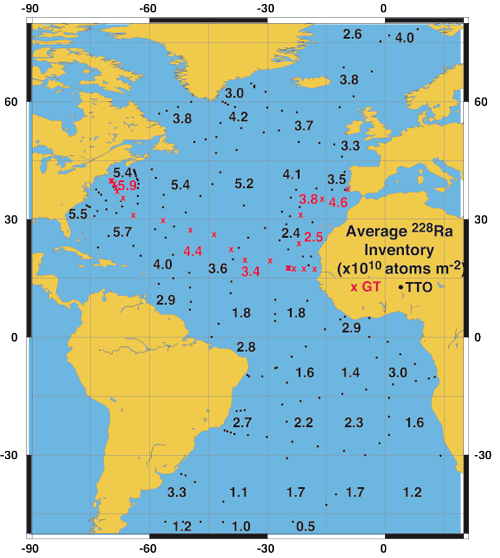