Three trace elements distributions (iron, manganese and aluminium) help to constrain the sources of chemical elements in the North Atlantic Ocean. Atmospheric, Mediterranean Sea and margin inputs are confirmed while the importance of the hydrothermal venting is revealed.

Hatta, Measures and co-workers (2014, see references below) established an overview of dissolved iron, manganese and aluminium (dFe, dMn and dAl respectively) distributions (see figures below) along the North Atlantic GA03 GEOTRACES section. Elevated dFe concentrations correlate with elevated dAl ones in the surface waters of the subtropical gyre, confirming a substantial atmospheric source for both tracers. But this is not the case for dMn. Sedimentary inputs from margins concern the three tracers but are mostly revealed from elevated dMn signals in the eastern basin, particularly near the African coast and in the western basin, along the advective flow path of the Upper Labrador Sea Water.

The most striking results are found in the neutrally buoyant hydrothermal plume sampled over the Mid-Atlantic Ridge. There the largest dFe anomaly (~68 nM), a dMn anomaly (up to ~33 nM) and large amount of Al (up to 40nM) are detected, with signals visible for ~500 km to the west of the ridge. 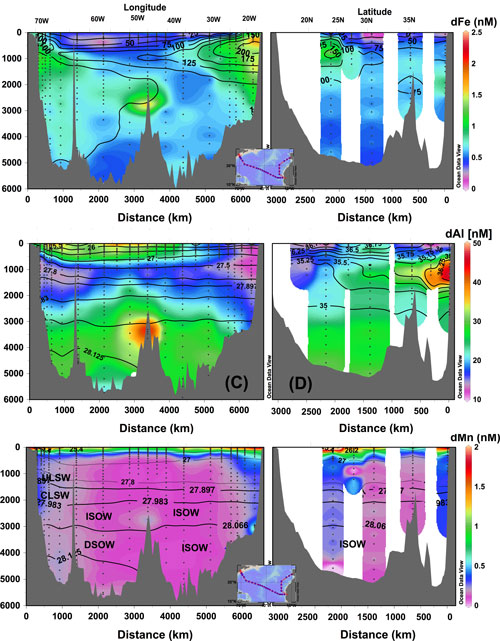