Three deep-sea profiles were produced for the analysis of copper (Cu) concentration, along a transect covering very different biogeochemical regions: the oligotrophic North Tasman Sea (30ºS), the Tasman Front (40°S) and the productive waters of the Southern Ocean in the south (46°S).

Despite these differences, the Cu isotope composition of all three profiles was relatively homogenous. This homogeneity is attributed to the fact that more than 99% of the Cu is organically complexed, measured as part of the same study (Thompson et al, 2014; see references below). It is therefore argued that organic complexation stabilises heavy values of seawater stable copper isotopic composition (δ65Cu).

The authors also propose that decomposition of organic Cu complexes in environments such as anoxic basins may provide an isotopically heavy source of Cu for further scavenging and/or removal to the sediments. Such mechanism would help to balance the oceanic budget of δ65Cu, discussed in Little et al, 2014 (see reference below, and GEOTRACES science highlight). 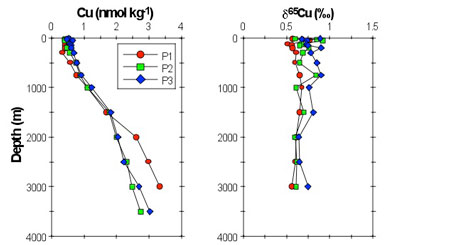