The distribution of the δ15N and the δ18O in the U.S. GEOTRACES North Atlantic zonal transect (GA03 section) provides an insight on the interaction between aspects of the circulation of the Atlantic basin and features of the N cycle in the absence of a regional signal of water column denitrification. In the absence of denitrification, the elevation of the δ15N at intermediate depths (red dots on the eastern side of the transect as shown by the OMPA analyses of Jenkins et al., 2014) must derive from outside the basin, most likely entering from the Southern Ocean. The lack of a similar elevation in δ18O implies that the nitrate in southern-sourced intermediate waters has been diluted by the addition of nitrate from regeneration/nitrification in the low latitudes. The high nitrate δ15N in northward flowing intermediate waters is almost entirely erased by the input of low-δ15N newly fixed nitrogen to the Atlantic (including that from the Mediterranean) prior to the incorporation of those intermediate depth waters in southward flowing North Atlantic Deep Water. The data appear consistent with a nitrogen isotopic balance between northward and southward nitrate transports across the GEOTRACES section, suggesting that most Atlantic nitrogen fixation occurs south of the section. 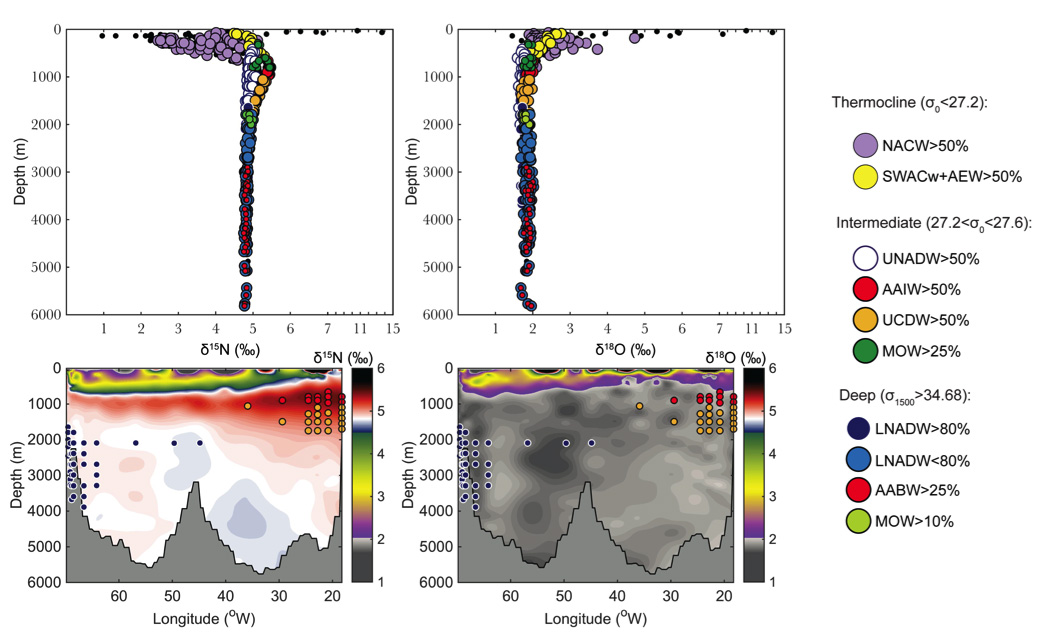 Figure: Depth profiles (top panels) and depth sections (bottom panels) of the δ15N and the δ18O of nitrate from the US GEOTRACES North Atlantic cross-basin transect. Colored circles are water type tags indicating samples with a high contribution of water masses relevant to the circulation of the Atlantic basin (from the OMPA analyses of Jenkins et al.).