In the Eastern China Sea (ECS), the continental shelf serves as an important source of dissolved aluminium (DAl) for the overlaying waters via resuspension of sediments and benthic fluxes. This was demonstrated by Ren et al. (2015, see reference below), who identified cross-shelf transport in the subsurface water over the ECS. The DAl export from the 100 m isobath is 1.67 x 1010 g yr.

Thanks to the Kuroshio current, more than half of this Al is transported northward within the region enclosed by the 100 m and 200 m isobaths to the Japan Sea/East Sea. The remaining flux is transported out of the shelf across the 200 m isobath. This highlights the importance of coastal processes and subsurface cross-shelf transport as a source of dissolved trace elements to the open ocean. 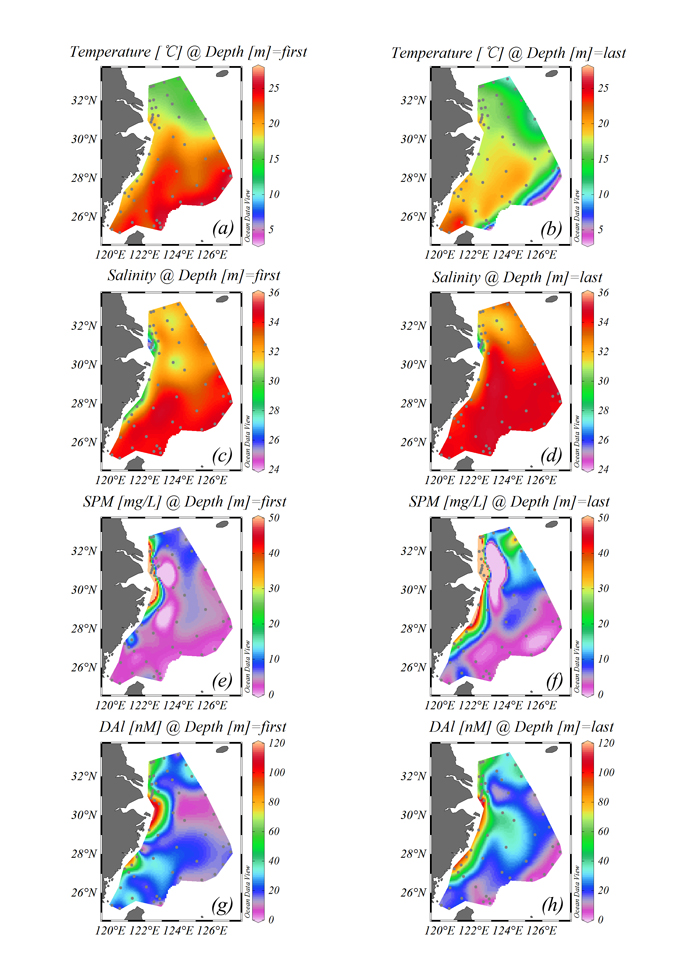 Figure: Horizontal distributions of temperature, salinity, SPM (mg/L), and dissolved Al (nM) in the surface water (a, c, e, g) and bottom water (b, d, f, h, with water depth ranging from 13 m to 1200 m) of the East China Sea. Click here to view the figure larger.
Changjiang Diluted Water (CDW) expanded southeastward in the surface, and was restricted to the coastal area by the incursion of Kuroshio Waters (KW). The incursion of Kuroshio Subsurface Water (KSSW) in the bottom layer can reach 30 °N near the Changjiang Estuary. The concentration of dissolved Al decreased gradually from the coastal area to the central shelf, and then decreased sharply at the shelf break. The bottom layer had higher concentrations of dissolved Al than in the surface layer in the coastal and middle shelf, consistent with their higher concentrations of SPM.