Crusius and co-workers (2017, see reference below), reveal temporal and spatial variability in the sources of iron (Fe) to the northern Gulf of Alaska, based on data from cruises from three different seasons from the Copper River (AK) mouth to beyond the shelf break.  April data are the first to describe late winter Fe behavior before surface-water nitrate depletion began.  Sediment resuspension during winter and spring storms generated high “total dissolvable Fe” (TDFe) concentrations of ~1000 nmol kg-1 along the entire continental shelf, which decreased beyond the shelf break.  In July, high TDFe concentrations were similar on the shelf, but more spatially variable, and driven by low-salinity glacial meltwater.  Conversely, dissolved Fe (DFe) concentrations in surface waters were far lower and more seasonally consistent, ranging from ~4 nmol kg-1 in nearshore waters to ~0.6-1.5 nmol kg-1 seaward of the shelf break during April and July, despite dramatic depletion of nitrate over that period. The April DFe data can be simulated using a simple numerical model that assumes a DFe flux from shelf sediments, horizontal transport by eddy diffusion, and removal by scavenging.  Calculations suggest dust is an important Fe source beyond the shelf break. 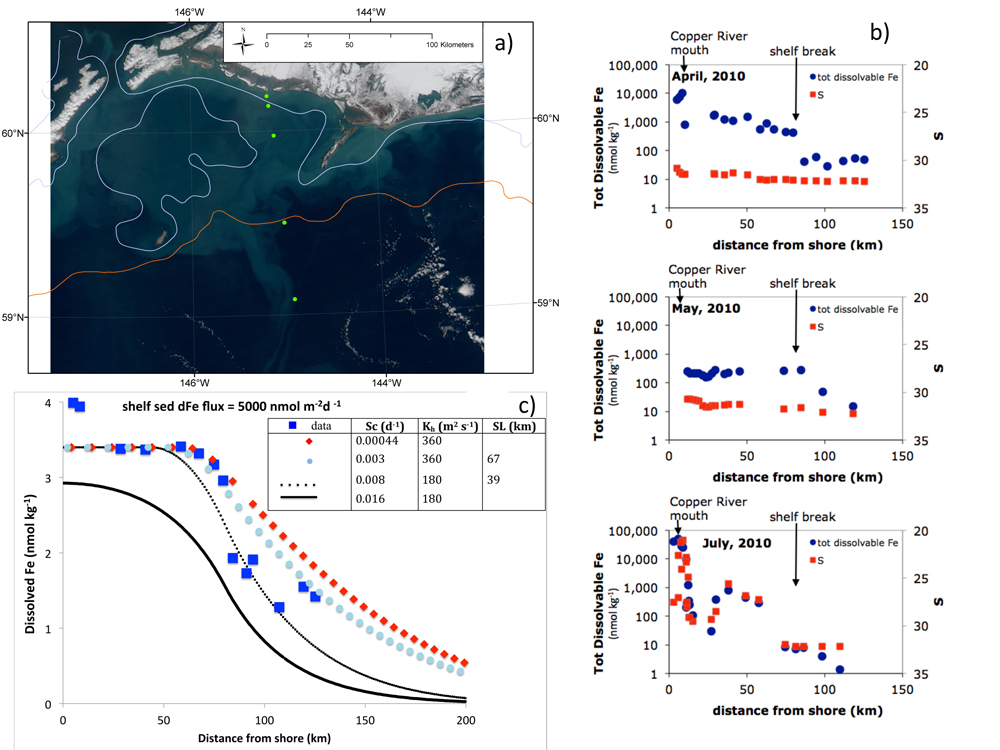 Figure: Seasonal and spatial variability in Fe in the northern Gulf of Alaska: a) Sampling region in the northern Gulf of Alaska extending from the Copper River Mouth to ~50 km beyond the shelf break.  The surface water transect was carried out along the line defined by the green dots (which define sampling stations).  This is superimposed upon a MODIS image from 9 April, 2010 that shows resuspended sediments (light blue) landward of the 500-m depth contour (orange line).  b) Surface water total dissolvable Fe (TDFe) concentrations and salinity plotted versus distance from shore during April, May and July.  c) Dissolved Fe (DFe) data (blue squares) from April, along with several time-dependent model simulations that bracket the data, with varying flux of DFe from the shelf sediments, horizontal eddy diffusion, and removal by chemical scavenging. Click here to view the figure larger.