In the framework of Indian GEOTRACES cruise GI02, high-resolution sampling was carried out in the Arabian Sea and the Indian Ocean during April–May 2014. The first 234Th-based carbon export flux ever made in the southern Arabian Sea are presented. In contrast to episodic decrease of primary production from 17°N to 16°S, POC export fluxes show high values  (up to 9 mmol m-2 d-1), definitely larger than what was observed in the Bengal Bay at the same season. 234Th deficit in subsurface depths is due to the diel vertical migration, grazing, and fecal pellet production by mesozooplankton. Interestingly, the modelled POC export fluxes from in situ and satellite-derived primary production are higher than the field values (234Th-Based) for two models and are comparable for a third one, discrepancies discussed in the paper. 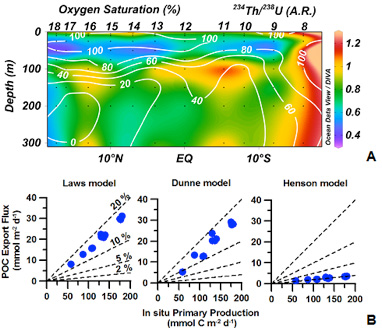 Figures: (A) Depth-latitude vertical profile of oxygen saturation (%) (white contour lines) is shown relative to 234Th/238U activity ratio (A.R.) along the 65°E meridional section of the Arabian Sea and the Indian Ocean. (B) Plot showing relation between primary production and POC export flux. The POC export flux sinking out of the euphotic zone was derived by Laws, Dunne and Henson’s models. Dashed trend lines represent export efficiencies of 2, 5, 10 and 20%. Click here to view the figure larger.