The International Polar Year (IPY) 2007-2008 provided an excellent opportunity for a flying start of the GEOTRACES program.

Major IPY GEOTRACES campaigns in the Arctic region (Figure 1) were the multiyear program on the iron cycle in the Sea of Okhotsk by Japan, the Swedish expedition in the Siberian Sea, the deep sections expedition of 10 weeks of icebreaker Polarstern by Germany and The Netherlands, the survey cruise aboard Hesperides (Spain) from Spitsbergen to Iceland, and the cruise in the Beaufort Sea (Canada).

One of the highlights of the GEOTRACES IPY campaigns is a long section across the Arctic Ocean basin with first ever data of dissolved iron. The section shows a surprisingly large hydrothermal plume of iron in deep waters over Gakkel Ridge (Figure 2), a known site of deep-sea hydrothermal vents. Moreover, it shows the relatively high dissolved iron in the surface waters that is transported by the Transpolar Drift from Siberian rivers and shelves into the centre of the Arctic basin. 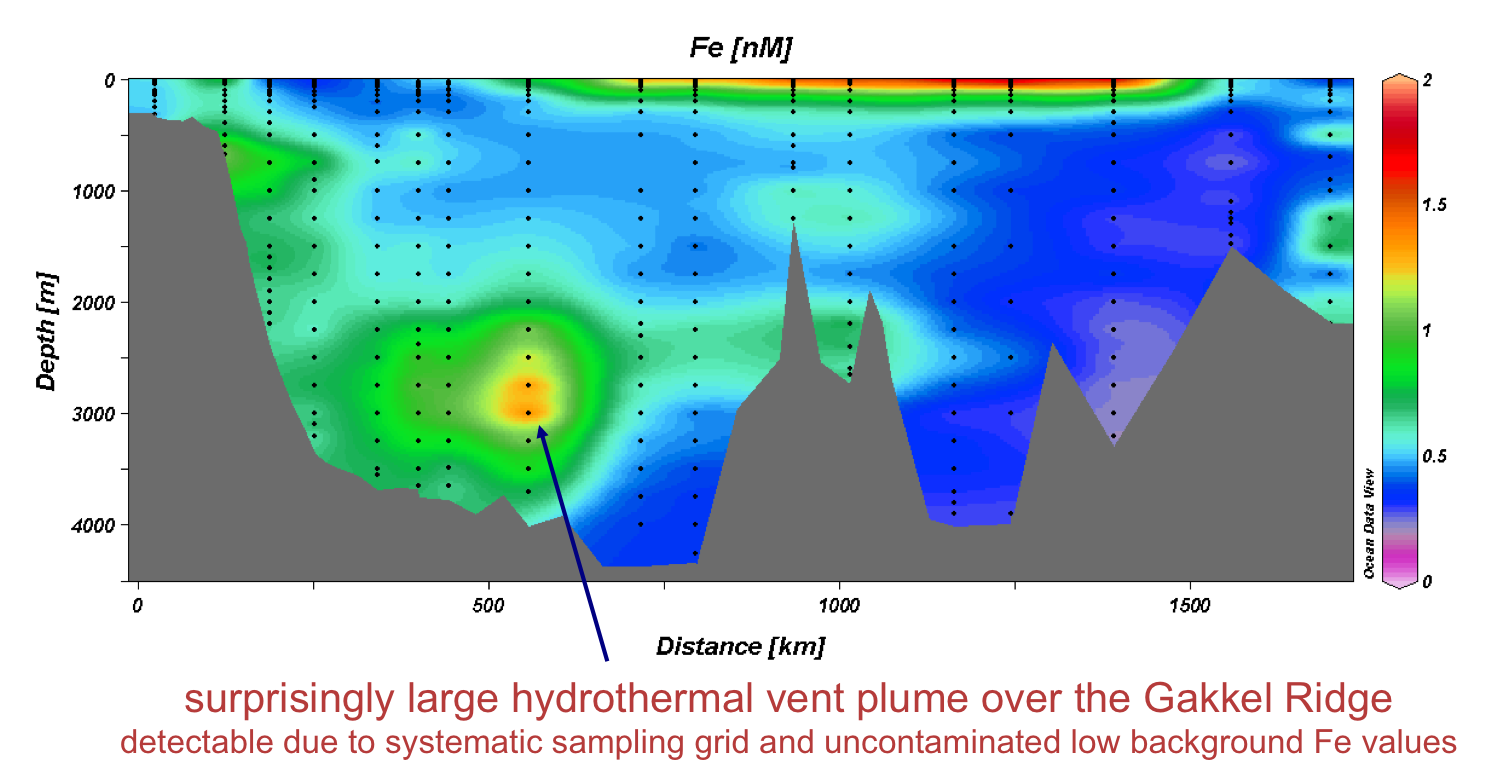 IPY GEOTRACES campaigns in the Southern Ocean (Figure 3) were a suite of three cruises by Australia (SIPEX, SR3, SAZ-SENSE), the Spanish ATOS2 cruise, the BONUS-GoodHope cruise (France) from South Africa to the Zero Meridian, which connected with the Zero & Drake expedition aboard Polarstern (Germany and The Netherlands) along the Zero Meridian and across Weddell Sea and Drake Passage. 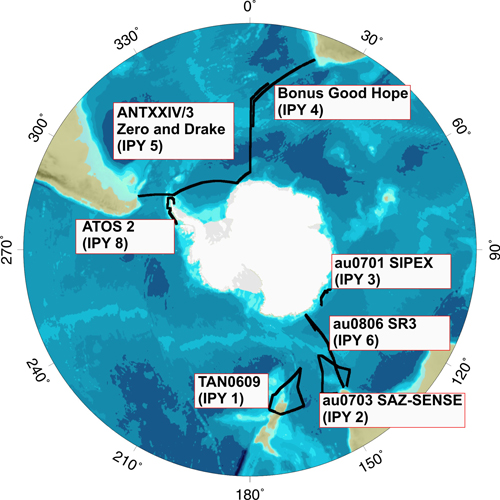 A significant achievement of the IPY GEOTRACES campaigns is the first full depth measurements of iron and other trace elements in the Southern Ocean. For example, the distribution of dissolved iron along the SR3 section south of Tasmania (Figure 4) shows maximum surface water concentrations between the latitudes of 60° and 65°S. The salinity (Figure 4, lower left panel) and oxygen (Figure 4, lower right panel) distributions along this section indicate that high salinity, low oxygen, nutrient-rich circumpolar deep water upwells within this latitude band. These results, in combination with much lower dissolved iron concentrations north of 60°S, support the view that upwelling is more significant than deposition of aerosols as a source of iron to this polar region during autumn. Furthermore, the iron distribution indicates the importance of bottom sediments and hydrothermalism as sources of iron to the deep Southern Ocean (Tagliabue et al., 2010), sources that have been neglected in previous biogeochemical models for the region. 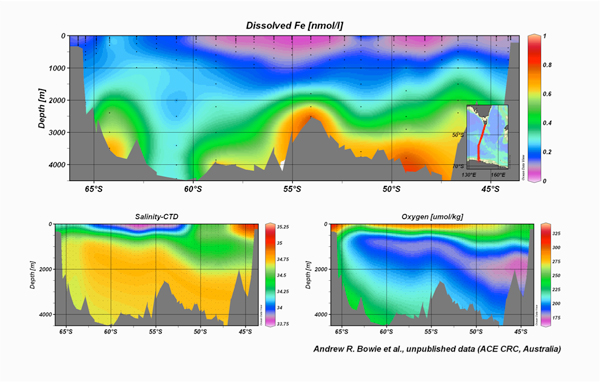 Another highlight is one of the first vertical profiles of stable isotopes of dissolved iron, showing consistent trends likely due to biological fractionation of these iron isotopes (Lacan et al., 2008).

The first ever detailed deep section of dissolved manganese at the Zero Meridian also shows a hydrothermal plume, here over the Bouvet triple junction of three ocean ridges (Figure 5). 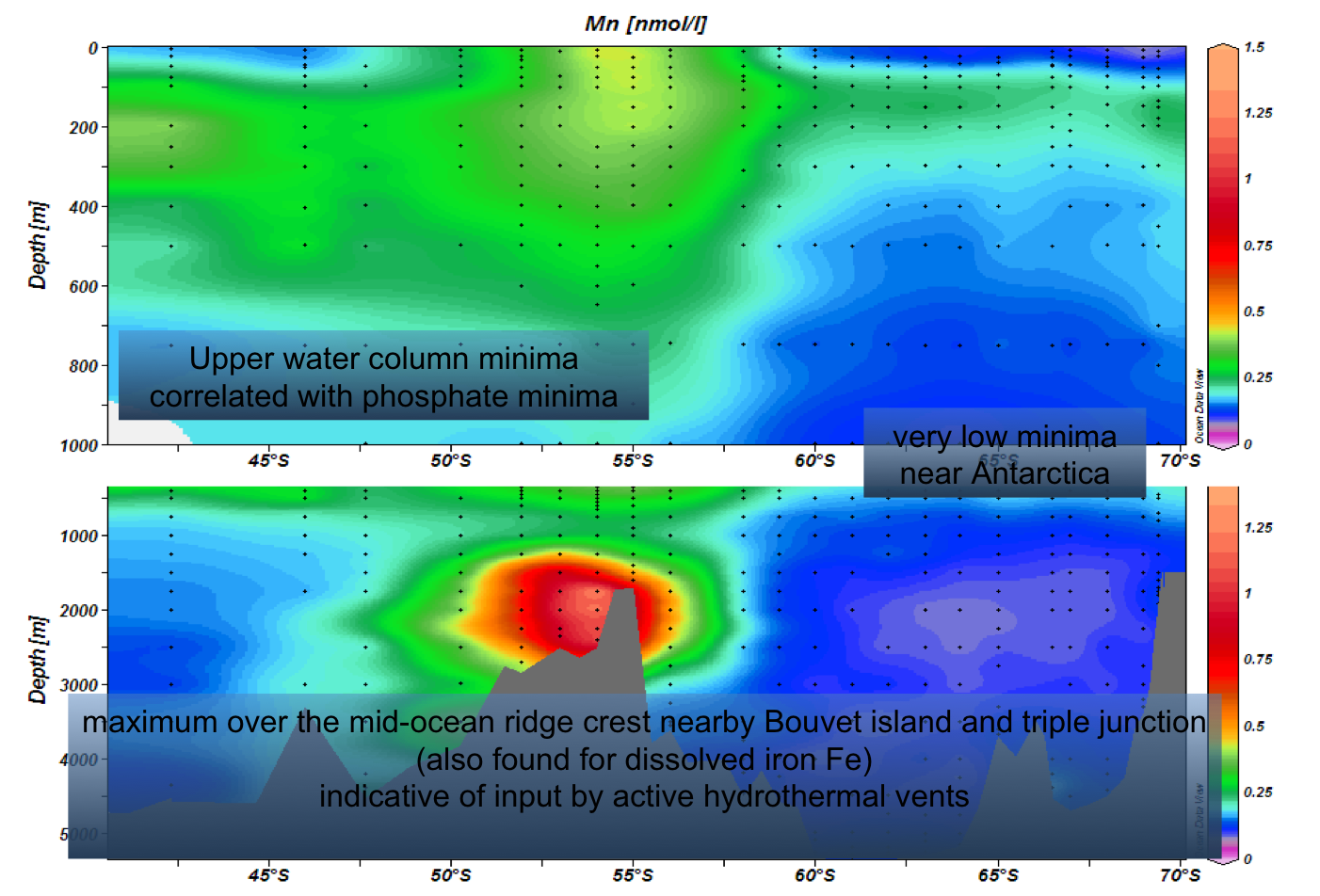 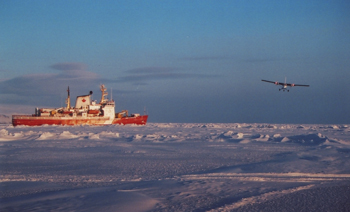 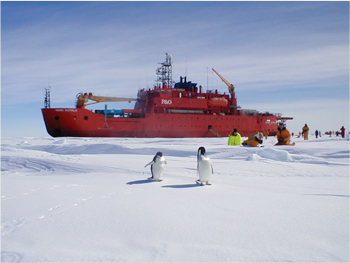