Separation of the particulate (> 0:22 μm), colloidal (0.22 μm–1 kDa), and truly dissolved (< 1 kDa) fractions of iron (Fe) was carried out along the 600 km mixing between the Lena river and the Laptev seawater. While 99% of the particulate Fe and 90% of the colloidal one are disappearing across the shelf, the truly dissolved Fe stays relatively constant along the Lena River plume. This could indicate that this truly dissolved fraction is an important source of bioavailable Fe, along with colloidal Fe, for the local Arctic phytoplankton. Conrad and co-workers (2019, see reference below) also determined the Fe isotopes (δ56Fe) on these fractions. Negative colloidal δ56Fe values close to the river mouth are evolving to positive values at the outermost stations (see figure below). The shelf is thus interpreted as a sink for Fe, the negative values representing reduced ferrihydrites. Contrastingly, the positive values would correspond to oxidized Fe oxyhydroxydes, that are remaining in the water column and tag the Fe isotopic signature of the Arctic Ocean. 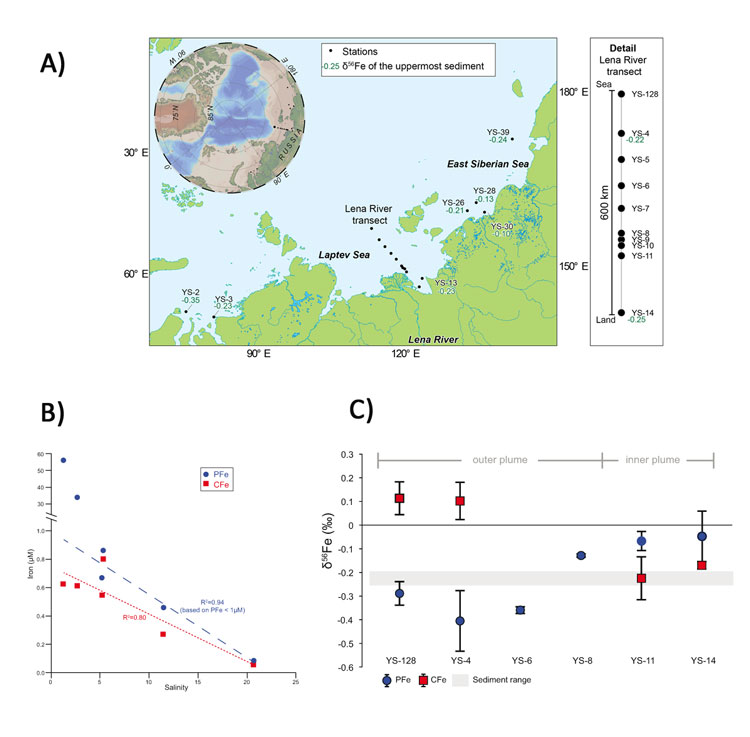 Figure: A) Sampling stations in the Arctic Ocean: The black dots mark the sampling stations in the Arctic Ocean. Along the Lena River–Laptev Sea transect (next to the map) we filtered the water samples with different techniques to separate the particles from the colloids and the truly dissolved phase. Iron concentrations and isotope ratios were measured on the different sizes, as well as in the sediments along the East Siberian Sea Shelf. B) The colloidal (CFe) and particulate (PFe) iron concentrations plotted vs. salinity: Particulate Fe is dominating the Fe system close to the river mouth at low salinities, but the increasing salinity along the freshwater plume promotes the flocculation and settling of particles and colloids. Therefore, the concentrations of PFe and CFe are equal at higher salinities. C) Iron-isotope values along the Lena River freshwater plume and the uppermost sediment of the East Siberian Arctic Shelf (ESAS): Negative particulate and colloidal Fe-isotope values are lost during estuarine mixing and buried in the sediment, which shows a similar range of Fe isotope ratios. The positive colloidal Fe isotope values found in the outer plume are resistant to estuarine mixing and can be found in the Arctic Ocean. (Reprinted from Conrad, et al, 2019. Click here to view the image larger.