Mc Allister and Orians (2015, see reference below) present the first dissolved Ga (DGa) data ever reported in the Arctic. DGa behaves very conservatively, helping to constrain the mixing of water masses of Pacific and Atlantic origins. Its conservative behaviour helps distinguishing seasonal processes that are influencing temperature and Nitrate:Phosphate of Pacific Water entering the Arctic; it also supports the interpretation that nitrogen fixation rates are associated with Pacific source waters and not to freshwater sources (i.e. Mackenzie River or sea ice melt). Comparing DGa and dissolved aluminium (DAl) profiles reveals that differential scavenging rates are affecting the two tracers. 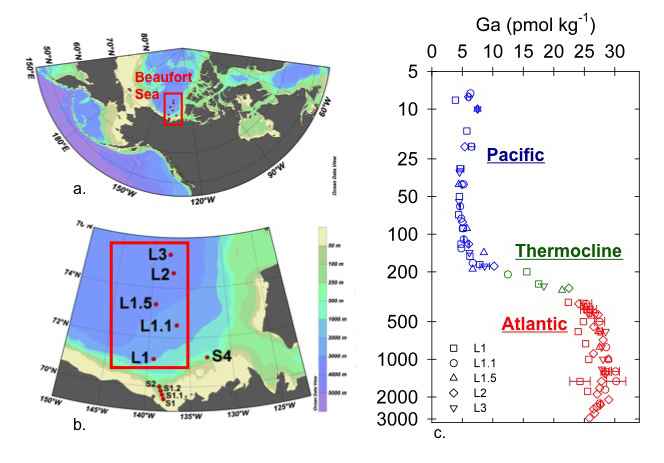 Figure: a. Dissolved gallium (Ga) was measured in the Beaufort Sea of the Western Arctic Ocean, b. the transect comprising stations L1 – L3 represent waters of the Canadian Basin, S stations represent the shelf and are discussed further in the manuscript, c) concentrations of dissolved Ga in the Canadian Basin are shown to provide a conservative tracer of Pacific and Atlantic source waters. Low concentrations of dissolved Ga associated with Pacific waters increase smoothly through the thermocline to comparatively high concentrations of Atlantic source waters. Note log depth scale to assist visualization of shallow depths.