Roshan and Wu (2015, see reference below) reveal that the correlation between dissolved zinc (Zn) and silicon (Si) is relatively weak in the North Atlantic Ocean (GA03 US section). They use the results of an Optimum Multi-Parameter Water Mass Analysis to establish which parameter is mainly controlling the Zn distribution. Surprisingly, they present evidence that remineralization might have an insignificant effect on the zinc distribution in this region. They conclude that dissolved zinc in the North Atlantic Ocean is mainly controlled by water mass mixing, although some water mass end-members exhibit deviations in the Zn-Si correlation, as for example the Mediterranean Outflow Waters. Unexpected large Zn inputs of hydrothermal origin are also perturbing the game… 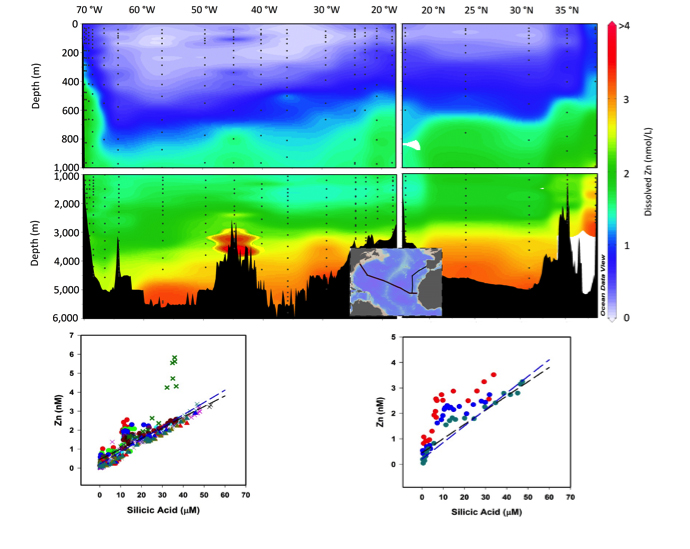 Figure: Top panel shows the distribution of dissolved Zn along the GA03. Bottom panel shows the Zn-Si relationship for the zonal (left) and meridional (right) transect. Disappearance of a linear correlation is evident, particularly for the meridional transect where the Mediterranean waters have a great influence. Click here to view the figure larger.