The linear relationship between the seawater cadmium and phosphate dissolved concentrations lead to use the cadmium/calcium (Cd/Ca) imprinted in calcareous archives to reconstruct the past phosphate (PO4) distributions. However, variations in the Cd/PO4 ratio between different water masses and within vertical oceanic profiles were recently identified. Among the processes that could explain these variations, sequestration of Cd into sulphide phases in microenvironments within sinking biogenic particles has been suggested as a mechanism for Cd depletion (Figure C). Guinoiseau and co-workers (2018, see reference below) experimentally tested if the cadmium sulphide (CdS) precipitation results in a fractionation of Cd isotopes. These experiments were conducted under low oxygen condition, in fresh and salty water, with variable cadmium/sulphide ratios… and they demonstrate, for the first time, an enrichment of light Cd isotopes in the precipitated CdS (Figure A) and a decrease in the fractionation factor (αCdsolution–CdS) with increasing salinity. The fractionation factor between CdS and the seawater matches remarkably the Cd isotope shift observed in modern oceanic oxygen minimum zone (Figure B). In other words, this work proposes that Cd isotopes are interesting tracers of the sequestration of Cd as CdS in low oxygen environment. 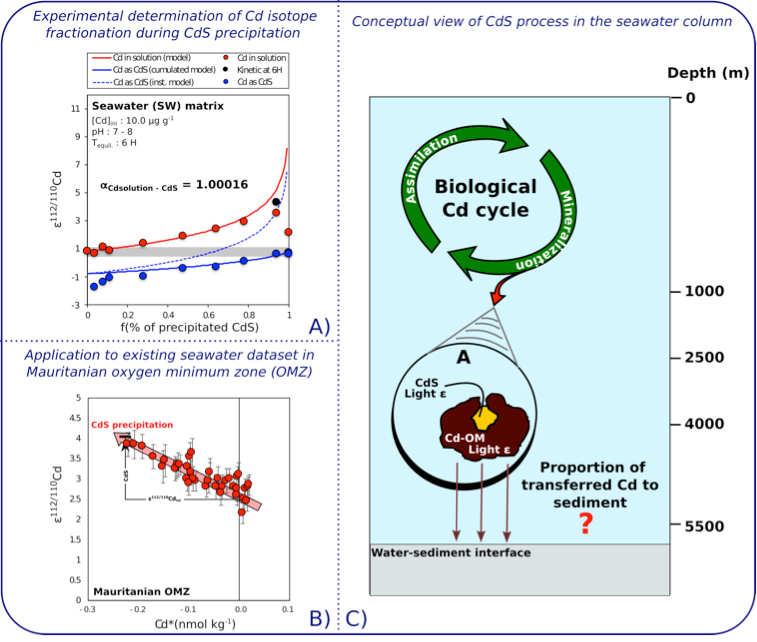 Figure: Identification of cadmium sulphide (CdS) precipitates as an important Cd sequestration process in the ocean. A) Determination of Cd isotope fractionation (αCdsolution-CdS in the figure) during precipitation of CdS in seawater matrix. B) Agreement between the experimental fractionation factor and the seawater isotope data recorded in oxygen minimum zone (OMZ) where CdS is prone to precipitate. C) Schematic view of CdS process occurring within sinking biogenic particles. Click here to view the figure larger.