Total mercury (THg), methylated mercury (MeHg), and dissolved gaseous mercury (DGM) concentrations were determined along 40°S in the Atlantic Ocean. All Hg species had higher concentrations in western than in eastern basin, although they are at the ultra-low femtomolar level.

MeHg increases with lower oxygen concentration, substantiating that microbial respiration of organic matter stimulates MeHg formation. Sediment is generally a likely source of MeHg to the water column; however it stays a modest contributor in this ocean region. At the surface, photo-demethylation might be responsible of the low MeHg concentration.

DMeHg was measured only at one station. As expected, it was higher in the intermediate and deep waters below 1000m and very low above them, especially in the surface waters. It reached its highest concentration in the Upper Circumpolar Deep Water (UCDW), similarly to DGM, probably due to lower oxygen concentrations and hence lower oxidation potential.

Altogether, results show very dynamic Hg processes in this ocean region, which are of global importance for Hg cycling. 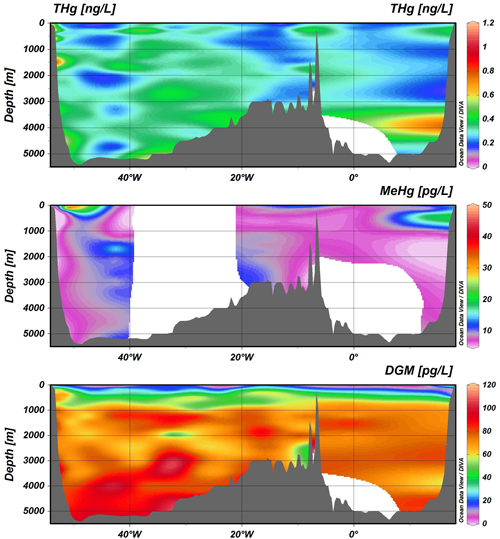 Figure: The figure shows total mercury (THg), monomethyl mercury (MeHg) and dissolved gaseous mercury (DGM) concentrations in the water column. Mercury is ubiquitous (THg), DGM is stratified, which means that different water masses have different DGM concentrations, and MeHg is very low, but is sometimes higher in regions with plenty of chlorophyll. Blank spaces show areas, where the concentrations are too low to be reliably measured. DGM is lowest at surface, indicating that it escapes from water to the atmosphere. Click here to view the figure larger.