Middag and co-workers (2019, see reference below) established the distributions of dissolved zinc (Zn), silicate (Si) and phosphate (PO4) at high resolution along the GEOTRACES transect GA02, in other words, covering the North and South Atlantic Ocean from Greenland to the tip of South America. This section track allowed them to unravel the influence of various water masses and local biogeochemical processes on these 3 tracers in the Atlantic Ocean. Although they confirm that the Southern Ocean water masses play a driving role in the distributions of these elements, the authors also show that subsurface water masses from northern origin are depleted in Zn, implying that the depletion of Zn occurs not only in the source region of Subantarctic Mode Waters as previously suggested. They also demonstrate that Atlantic remineralization has a profound influence on the PO4 distribution, but not on the distribution of Zn and Si. These 2 elements have a more limited supply to the surface ocean from underlying water masses and their fates are mostly governed by mixing of the various water masses along this transect. Both northern and southern high-latitude waters display a relatively high Zn:PO4 uptake and remineralization ratio, implying it is Zn availability and not only Fe limitation that leads to increased Zn uptake in the high-latitude regions. A close look at the Zn-Si relationships, allowed by the high resolution of the data, also show that it varies between the different water masses (see figure below)…the variations are also discussed in this paper! 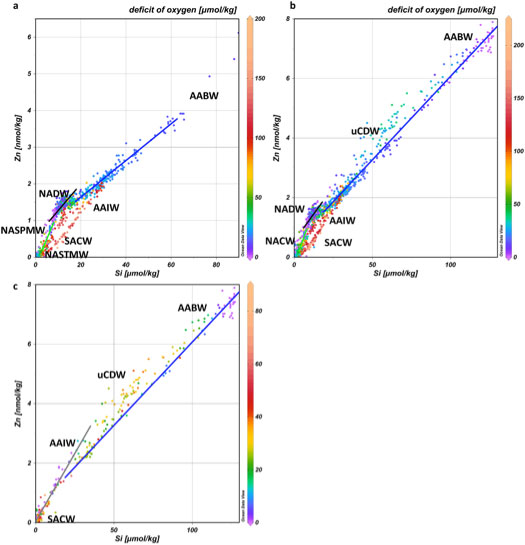