Stable lead isotopes have been measured by Maxence Paul and co-workers along 40°S during the first and second legs of the UK GEOTRACES cruise (GA10) in the Atlantic Ocean. They clearly help to identify three different end-members and mixing between them: open ocean South Atlantic seawater, Indian Ocean seawater, and coastal inputs from South Africa. Lead isotopes and concentrations are excellent fingerprints of the occurrence of Agulhas rings, as confirmed by satellite observations and in situ hydrographic data. This study reveals that the Agulhas Leakage is not only a key pathway for heat but also impacts biogeochemical cycles… 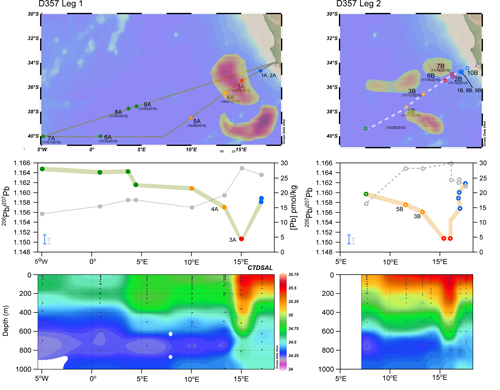 Figure: Maps showing the location of surface seawater samples collected during Leg A (left) and Leg B (right) of UK GEOTRACES GA10 cruise D357. Shaded areas highlight the position of Agulhas rings on 19 October 2010 (left) and 17 November 2010 (right), as suggested by sea surface height (SSH) anomalies obtained from satellite data (AVISO). Middle panels: Variations of Pb isotope compositions (colored circles) and Pb concentrations (grey circles) reflect the different sources present in the Cape Basin. Sample denoted as coastal, Agulhas, transitional, and open ocean are represented in blue, red, yellow and green, respectively. The Agulhas samples are marked by low 206Pb/207Pb and and their locations are in accord with the position of the Agulhas rings, as identified by satellite observations and salinity anomalies (bottom panels). Click here to view the figure larger.