Some phytoplankton species have the capacity to modify surface water arsenic speciation, inhibiting its toxicity. Such detoxification is operative in oligotrophic waters when phosphate concentrations are below those for arsenic (As). During the US GEOTRACES North Atlantic transect, fine determination of As speciation allowed establishing the potential use of these detoxification products as indicators of phosphorus (P) limitation. The new As indicator has been used to assess P-limitation in the North Atlantic, improving on the contradictory assessments using the conventional proxies. The coupled relationship between As and P is a classic example of a biogeochemical cycle, and how such relationship can be used as a tool in oceanography. 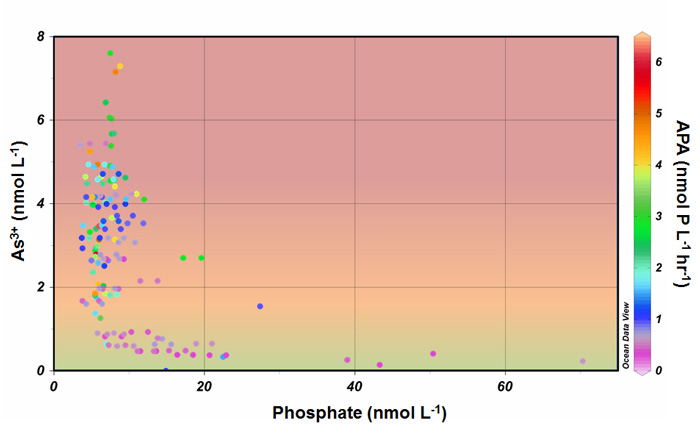 Figure: Relationship between inorganic phosphate, arsenite (As3+) and alkaline phosphate activity (APA), the latter being an enzyme to cleave organic-bound phosphate and typically increasing with decreasing inorganic phosphate. Arsenate (As5+) uptake by phytoplankton increases under low phosphate availability due to the chemical similarities between them. Detoxification includes reduction and excretion of As3+, consequently indicating moderate (orange background) and extreme (red background) limitation of phosphate. No phosphate limitation occurs if As3+ levels are below 1 nmol L-1 (green background).