Thanks to recent measurements during several oceanographic expeditions, among them GEOTRACES cruises, estimates of the total amount and spatial distribution of anthropogenic mercury in the global ocean were substantially improved.

Global budgets of total mercury suggest that there has been a tripling of the surface water mercury content and a ~150% increase in the amount of mercury in thermocline waters above preindustrial levels.

This study has been recently published in Nature Journal (1). 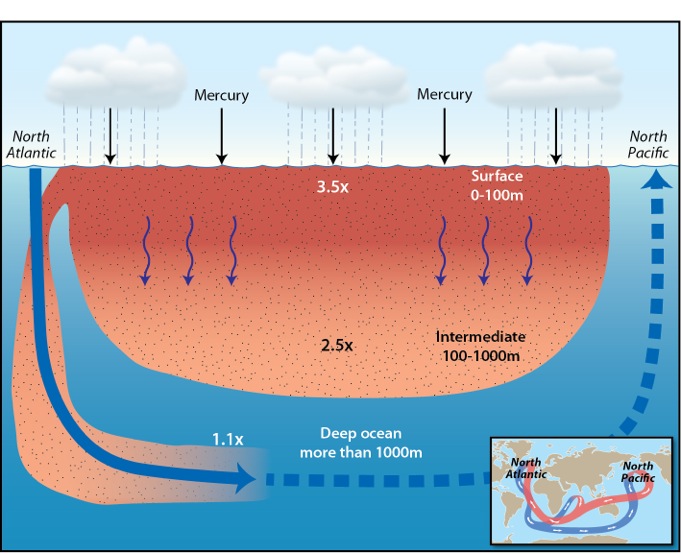 Figure: GEOTRACES researchers led by Carl Lamborg found that anthropogenic mercury (primarily atmospheric emissions produced by coal burning and cement production, as well as gold mining) have caused ocean waters down to 100 meters depth to be enriched in the toxic element up to 3.5 times the background level resulting from the natural breakdown, or weathering, of rocks on land. Once in the ocean, mercury adheres to organic particles and sinks or is consumed by progressively larger marine animals. One result is that intermediate levels of the ocean (between 100 and 1,000 meters depth) are also enriched in mercury up to 2.5 times the natural background rate. Even the deepest parts of the ocean have not escaped unscathed. Researchers found signs of pollution-derived mercury in the North Atlantic at depths below 1,000 meters, but those levels decreased as sampling efforts moved away from the North Atlantic basin. This is likely because pollution mercury has not yet moved with deep ocean currents throughout the global ocean, a process that can take as long as 1,000 years (extracted from WHOI’s press release). Artwork: Jack Cook, WHOI. Click here to view the figure larger.

(1) This is the second Nature paper resulting from the US North Atlantic cruise (GEOTRACES GA03 section).