Cadmium (Cd) is a micronutrient for marine algae and has a marine distribution similar to the macronutrients nitrate and phosphate. The use of sedimentary microfossil records of Cd, thus, allow reconstructions of past ocean nutrient distributions that facilitate the understanding of the role of the oceans in the carbon cycle and climate change. However, this proxy is limited by the incomplete knowledge of processes that control the addition and removal of Cd in the ocean, and Cd’s variability relative to major nutrients.

Janssen and co-authors (2014, see reference below) present coupled data of Cd concentration and isotopic composition in seawater and suspended marine particles. They found that in oxygen-deficient waters, Cd is removed directly via coprecipitation with sulfide. They also underline that, together with Cd, concurrent decoupling of zinc (Zn) and copper (Cu) from corresponding macronutrients are observed in the northeast Pacific Ocean. These results suggest that the marine Cd cycle (but also Zn and Cu ones) may be highly sensitive to the extent of global oceanic oxygen depletion. 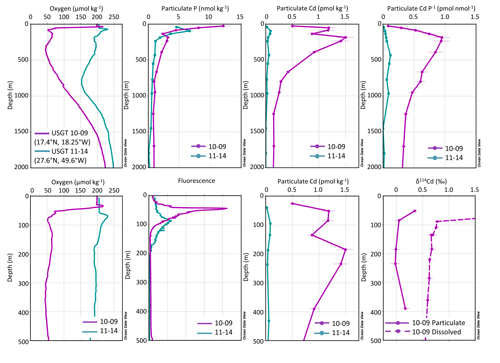 Figure: This figure shows particulate cadmium and phosphorus concentrations and cadmium stable isotope ratios (δ114Cd) from the US GEOTRACES North Atlantic Transect (GA03), along with oxygen concentrations and fluorescence which is an estimate of algal biomass.  In blue, station USGT 11-14 from the central North Atlantic (27.6°N, 49.6°W) and, in purple, station USGT 10-09 from the Mauritanian upwelling (17.4°N, 18.25°W). The upper panel shows the depth range of 0-2000 m while the lower panel focuses on the 0-500 m (oxygen deficient zone). Click here to view the figure larger.