These three works confirm the conservative behaviour of Nd isotopic composition far from main biogeochemical disturbances, such as lithogenic inputs or significant biological activity. But more importantly, they reveal features in the behaviours of the REE that might need to be considered more closely. These features rely on particle/dissolved exchanges that are not understood yet but they also yield unexpected decoupling along the REE array… Read more to discover the fascinating world of REE and Nd isotopic composition!

In January 2014 (Vol. 125), Garcia-Solsona and co-workers (Toulouse, France) described the distribution of dissolved and particulate REE and seawater Nd isotopic composition in samples from the IPY/GEOTRACES Bonus Good Hope (BGH) cruise between South Africa and the Southern Ocean (57°S). This work: Two weeks later (Vol. 126) Haley and co-workers (Corvallis, USA) presented the first combined distributions of dissolved REEs and Nd isotopes in the Gulf of Alaska. They reveal for the first time that: 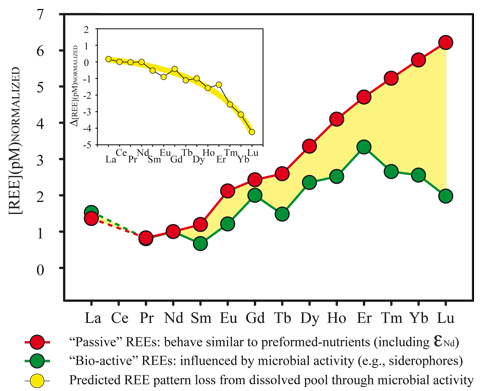 In early February 2014 (Vol. 127), Molina-Kescher and co-workers (Kiel, Germany) proposed the first detailed analysis of dissolved Nd isotopes and REEs in intermediate and deep waters along a zonal transect between South America and New Zealand (~40°S). These authors: