Hayes and co-workers are back with another rich contribution, based on dissolved thorium-232 (232Th) and thorium-230 (230Th) (click here to access previous highlight from the same author).

The game is to use the fact that both isotopes have readily different sources to the ocean, while both are supposed to be removed by particles. 232Th is lithogenic, therefore introduced by external sources (dust, rivers, etc.), while 230Th is internally produced as decay product of the soluble uranium-234 (234U). Playing with these differences, together with a large set of data on seven water column profiles in the North Pacific, the authors demonstrate that: 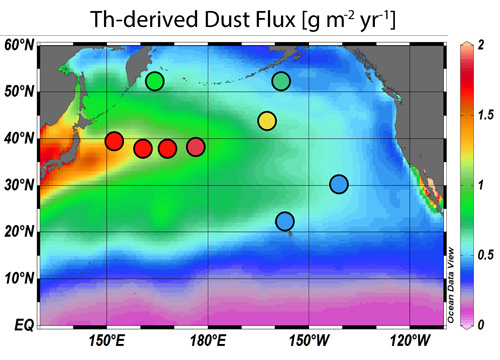 Figure: Eolian dust fluxes to the North Pacific as estimated from dissolved 232Th-230Th measurements (represented by circles) and from model estimates constrained largely from satellite optical depth (represented by the colormap from Mahowald et al. 2005). The same colour codes have been used for the circles and the colormap.
Click here to see the figure larger.