Volcanic ash fertilization of iron-limited phytoplankton in remote marine waters has been suggested to perturb global biogeochemical cycles and climate. For example, ash from the Pinatubo (Philippines) eruption in 1991 was suggested to have fertilized vast areas of the iron-limited Southern Ocean – potentially causing the drawdown in atmospheric carbon dioxide observed subsequently. However, until recently the impact of volcanic ash on phytoplankton communities in the Southern Ocean had never been directly tested.

Browning and co-authors conducted over 20 experiments in the South Atlantic and Southern Ocean where they added small quantities of volcanic ash to natural phytoplankton communities incubated in bottles. The responses they observed led to two important findings: (i) they conclusively demonstrated for the first time that volcanic ash deposition events strongly stimulated phytoplankton in the Southern Ocean; and (ii) at several experimental locations phytoplankton responded significantly to supply of volcanic ash, but not to iron only. This latter finding could be particularly important as it suggests phytoplankton at these sites may have been limited by another micronutrient other than iron. Manganese concentrations at these sites were amongst some of the lowest ever recorded in seawater and Browning and co-authors therefore suggested that the enhanced response to ash may have likely been a result of relieving manganese (co)limitation.

Both of these findings could both have important implications for our understanding of marine biogeochemistry in the Southern Ocean. Firstly, the Southern Atlantic and Drake Passage, where the experiments were conducted, are areas highly prone to ash deposition from explosive volcanic eruptions in South America – suggesting that ash-driven fertilization and potential carbon export from these waters could be an important control on the biogeochemistry of the region. Secondly, if manganese is (co)limiting marine algae in these waters, addition of this element alongside iron might be critical for stimulating phytoplankton blooms in the region. 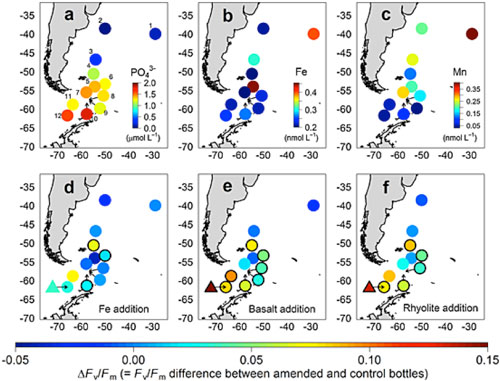 Figure: Maps showing the sites where experiments were conducted, highlighting the nutrient concentrations measured in seawater (warmer colors represent higher nutrient concentrations) and the response of phytoplankton to iron and ash additions (warmer colors represent larger phytoplankton responses). For (d-e) sites where the phytoplankton response was statistically significant (relative to bottles where no treatment was made) are shown with black outlines. Please click here to view the figure larger.