Atmospheric dust is considered an important source of trace elements to the ocean. As part of the Eastern Pacific Zonal Transect GEOTRACES cruise (EPZT GP16), Buck and co-workers collected 17 (3-day integrated) aerosol samples along this transect known for its low dust input. Chemical composition and elemental ratios indicate crustal sources for aluminium (Al), titanium (Ti), vanadium (V), manganese (Mn), and iron (Fe), while the analyses suggest that copper (Cu), cadmium (Cd), and lead (Pb) originate from anthropogenic emission. The concentrations of the crustal elements show sharp decreasing gradients within approximately 750 km moving west from the coast of South America. This trend was also observed in the anthropogenic elements. Interestingly, although the highest aerosol concentrations were observed over the Peru upwelling zone, fluxes estimated using a beryllium-7 (7Be) method demonstrate that atmospheric deposition was a minor source of bioavailable iron in this area, while further offshore the relative input from the atmosphere had a greater impact on surface trace metal concentrations. This work also underlines that elemental ratios were more consistent with estimates in average Andesitic crust than in bulk upper continental crust, reinforcing the necessity to carefully consider the source material used to assess trace element enrichment. 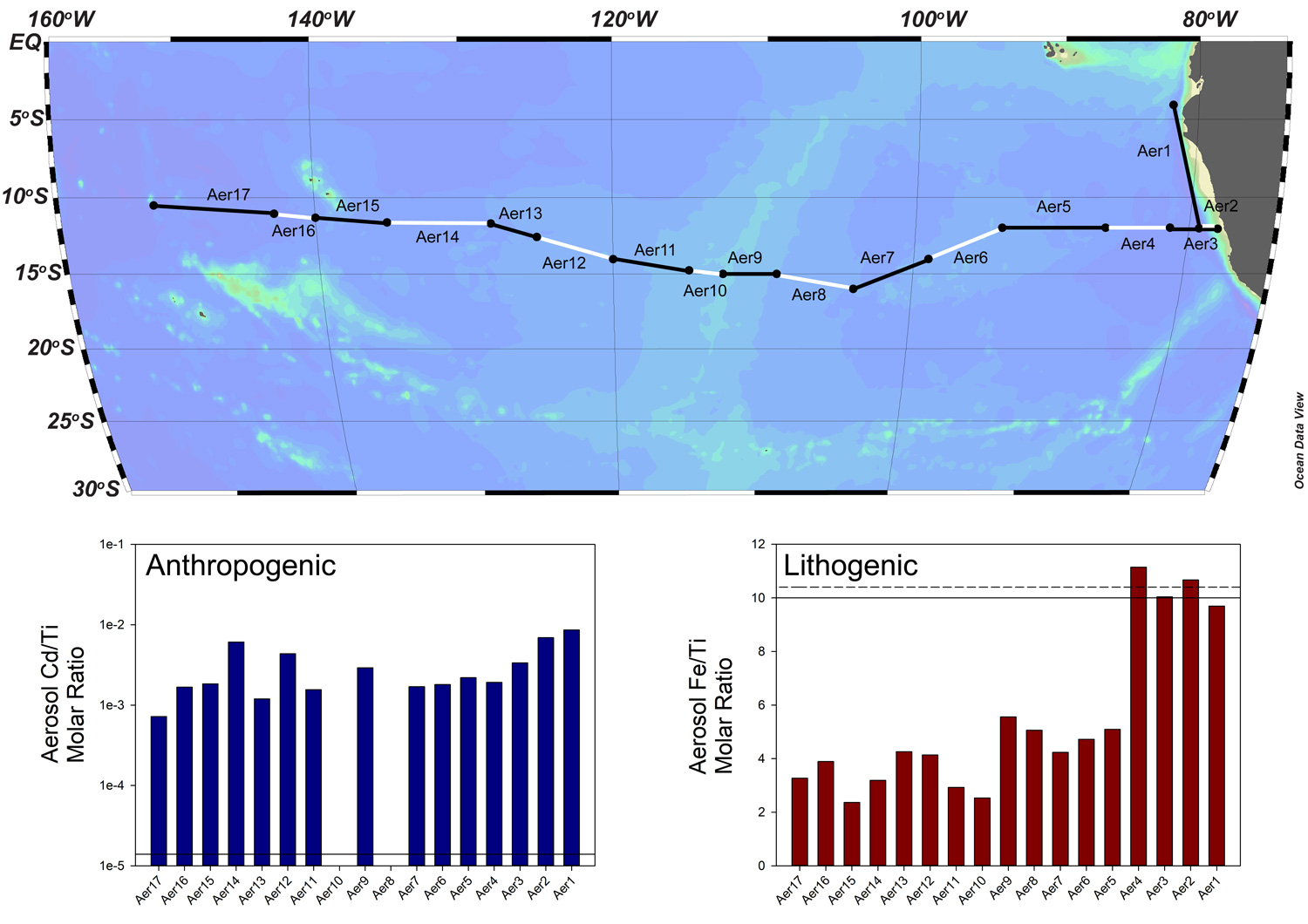 Figure: (Top) This map shows the GP16 cruise track from coastal South America to French Polynesia completed during October – December 2013 and indicates the spatial coverage of each collection (alternating black and white line segments). (Bottom) We can assess whether the aerosol material originated from lithogenic sources or anthropogenic sources, i.e. from blowing soil dust or from industry, by normalizing the observed concentrations of aerosol elements to the concentration of aerosol titanium (Ti). For comparison, the ratio of upper continental crust (solid line) and Andesitic crust (dashed line) are included (Taylor and McLennan, 1995). The ratio of aerosol cadmium (Cd) to Ti was two to three orders of magnitude greater than the crustal ratio throughout the cruise section with the highest ratios observed near the coast indicating an anthropogenic source. Aerosol iron (Fe) to Ti ratios displayed a crustal character in the 750 km region characterized by relatively high dust transport but decreased with distance from the continent.