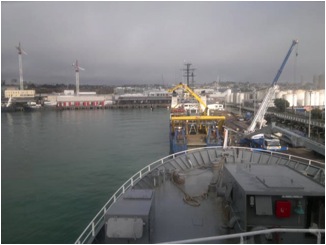 It is a rare occasion to have both the R/V Southern Surveyor and the R/V Tangaroa in port together, so we made the most of it.  On the 5th of June the gear swapping had begun, the clean lab containers, the trace-metal CTD, the McClain pumps and dozens of other materials were swapped between the two ships.   The cranes and crew were busy, and the scientists stretched their legs with for the first time in weeks or for the last time for weeks.

With the Australian team safely in port, and the New Zealand team making their way to Auckland, it was a great opportunity for us to learn what was in store.   They told us their stories, mostly of how well everything went.  The weather was in their favor and they accomplished quite a lot for an 11-scientist team.

We were scheduled to sail at 18:00 the next day, but with the unfortunate need for an emergency tooth extraction, we were delayed until the morning of the 7th, giving some of us a little bit longer to get organized while still on semi-solid ground.

One of our tasks was to build a clean lab in one of the not so clean spaces on the boat.  Using a lot of plastic and two laminar flow units, we managed to build a clean bubble, that is a little bit like a sauna, but will be used for some of the trace metal experiments that will take place over the next few weeks. 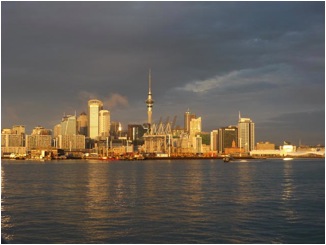 At roughly 08:00 on the 7th of June we set sail and the sunrise over Auckland was beautiful.  Our group of 24 scientists with various nationalities, New Zealand, Australian, American, Irish, German, Dutch, British, French, Jamaican, and Indian and our friendly and very helpful crew set off for our first station, the Brothers Volcano at 179.03 W, 34.3 S.  Luckily, this was about 24 hours away, as there were quite a few green faces around, and even more hidden away in their cabins.  But, by the time we reached the volcano everyone had found their sea legs and stomachs and was ready to go.

The brothers volcano is not a Geotraces station, but is located on our way to the first official station and was a great opportunity to not only collect samples from a deep sea vent, but to test the sampling gear as well.  The only gear left to test is the trace-metal CTD that is scheduled for this afternoon.  We are expected to reach our first Geotraces station, 172 W 32.5 S, at 15:00 tomorrow.  We hope the weather keeps treating us nicely.