We have had an exciting past few days on-board the Research Vessel Southern Surveyor. On Saturday we crossed the international date-line (1800) where east meets west, and all of a sudden tomorrow became yesterday! Although the ship’s time has not changed and we use UTC (Coordinated Universal Time) as the reference to record all science activities, we marked the occasion with a group photo (with some attempts at fancy dress) on the bow of the ship. 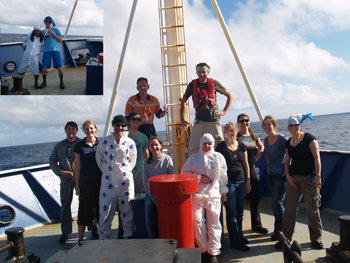 Sunday was another interesting day as we reached the Kermadec Trench, an extremely deep section of ocean northeast of New Zealand. The Kermadec Trench results from the active tectonic subduction zone, which runs along the length of the plate boundary, where the oceanic crust of the Pacific plate ‘sinks’ beneath the continental crust of the Australian plate. The echo sounder on-board, which establishes the depth of the seafloor beneath the ship, measured a massive 8850 m over one part of the Kermadec Trench!  Here, we deployed both the CTD and the Trace Metal Rosette (TMR) to depths of 6000 m (their maximum deployment depths). Sampling at this depth pushes the limits of the instruments attached to the CTD, as well as the amount of wire on the winches. The average depth of the ocean is around 4000 m, so to be able to collect seawater samples from such great depths is extremely exciting! Chief Scientist Andrew Bowie said he believed that this may be the deepest TMR deployed ever throughout the world’s oceans, although maybe others know different. The weather could not have been more beautiful in the last few days; with sunshine and light airy winds of less than 5 knots, making the sea glassy like a swimming pool, a reminder of just how powerful the winds can be in whipping up the ocean on other occasions. This fine weather was very fortuitous during the extremely deep cast, as we only had just over 6000 m of Dynex rope attached to the TMR. When there are large swells and strong currents a lot more rope or wire has to be let out from the winch, due to the angle of the rope, in order to reach the desired depth in the water column.

In addition to the GEOTRACES sampling program, scientist Christel Hassler has been running the bioGEOTRACES program on-board. The goal of bioGEOTRACES is to establish a complementary dataset of biological parameters, in relation to the distribution of trace metals and their isotopes in the ocean. In the surface of the ocean, where sunlight is able to penetrate, there is a whole world of tiny organisms, from larger species that we can see with our eyes (e.g., krill, copepods, salps) to tiny microscopic organisms like bacteria and viruses. Phytoplankton cells are the food factories of marine systems, converting inorganic carbon (i.e., carbon dioxide from the atmosphere that dissolves in seawater) into organic molecules via the process of photosynthesis. The reason why trace elements like iron, zinc and copper are important to micro-organisms, is that trace elements are essential to biochemical reactions required to sustain their growth (just like humans!). Most biological reactions depend on enzymes which require trace elements like iron, zinc or cobalt to work. Iron and copper are also used in redox reactions inside cells to transport electrons during respiration and photosynthetic processes, and are required for the atmospheric nitrogen fixation and nitrate assimilation by micro-organisms. In up to 40% of the ocean, biological growth is limited by a trace element (such as iron) rather than the major nutrients (such as nitrate or silicate). The distribution of trace elements in the ocean not only affects the biodiversity and biomass of marine micro-organisms, but micro-organisms also exert a feedback on the chemistry and solubility of trace elements, affecting their cycling. Combining measurements of trace elements, their isotopes and nutrients with biological parameters will allow scientists to work out the dynamics of the marine ecosystems, and the relationships between trace metal cycling and biological diversity. 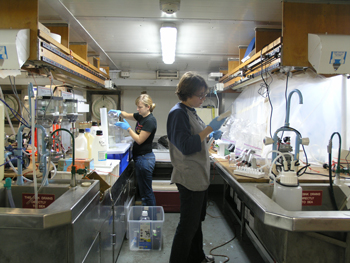 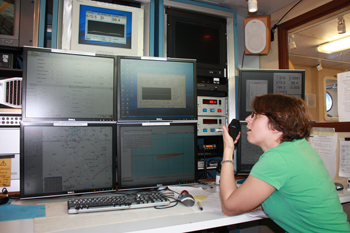 There are four types of biological samples collected on-board, which will be measured by several labs from different institutions in Australia, New Zealand and the United States.  Seawater is filtered for the analysis of pigments (such as Chlorophyll a), DNA and microscopy. Specific pigments occur in particular species, providing an indication of the dominant groups of phytoplankton, as well as a general estimation of the biomass. It is important to know which groups are present since different species have specific functions driving the cycles of carbon, nitrogen and iron. DNA information identifies specific genes that are known to be involved in nitrogen fixation. Flow cytometry is also used to classify the smaller organisms that may be present, such as bacteria and viruses.

The final sampling instrument that we are using on our GEOTRACES  voyage is a high volume aerosol sampler, that is installed at the very top of the ship on the ‘monkey island’. This unit filters large volumes of air and traps the dust particles carried from continental dust areas (such as outback Australia). Long range transport of dust is important for ocean biogeochemistry, since dust contains essential micronutrient such as iron and cobalt. The aerosol sampler has ‘sector control’ to ensure that the particles that are captured are from ambient air sources, rather than the ship itself! 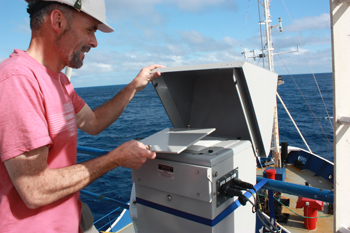 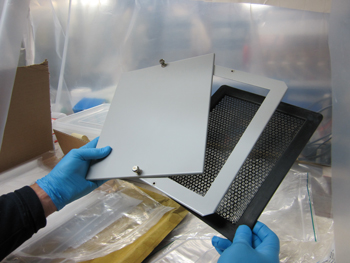