We are currently situated about 50 miles south of Norfolk Island in the Tasman Sea northwest of New Zealand. Unfortunately there is time to stop there, although there have been many calls to come up with a good enough reason to head to port for a night! On Friday the 20th, it was scientist Pier van der Merwe’s birthday on board the Southern Surveyor, which was celebrated with a massive chocolate cake presented by the stewards. Everyone has just about recovered in time for the super-station coming up on Monday, after an extremely busy mega-station early on Saturday morning, where over 300 samples were collected. We are almost half way through the GEOTRACES GP13 transect having just completed station 17.

As promised, this blog is all about how we sample for trace metals like iron, copper, zinc, cadmium, and some more exotic ones such as neodymium, in the ocean. The trace elements that we are collecting water samples for have extremely low concentrations in seawater, in the range of pico grams (1 x 10-12g per gram of seawater); which is like trying to find a pinhead in an Olympic size swimming pool! Since we are on a ship and metal (particularly rusty metal) is all around us, we have to take extra precautions to prevent contamination of the seawater samples. I caught up with the chief scientist Andrew Bowie to find out exactly how this is achieved, using the trace metal rosette (TMR) and the trace metal clean container. 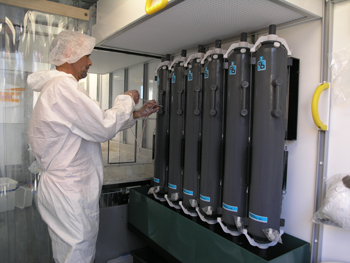 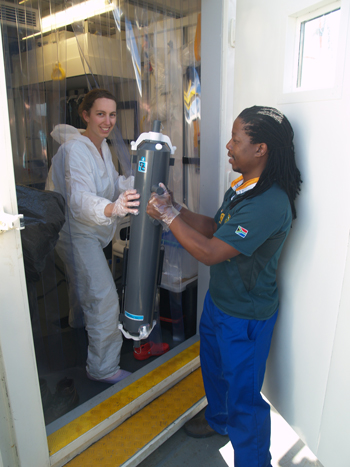 How is the trace metal rosette deployed?
The Niskin bottles of the TMR are kept inside the trace metal clean container where the seawater is sampled. At the last moment before deployment, the Niskin bottles are transferred from the clean container and set up on the TMR. The TMR is deployed from the stern of the Southern Surveyor using a non-metallic Dynex rope and a specialised trace metal friendly block suspended on the A-frame; which has a plastic drum which the Dynex rope passes through. The TMR does not have the capacity to communicate with the ship during deployment. Instead it works off an autonomous system that is pre-programmed before deployment. There is a pressure sensor attached to the TMR that triggers each Niskin bottle at pre-determined depths as the TMR is winched back to the surface, before recovery onto the ship’s aft deck. 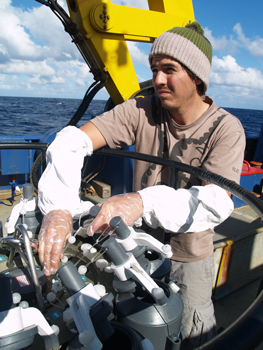 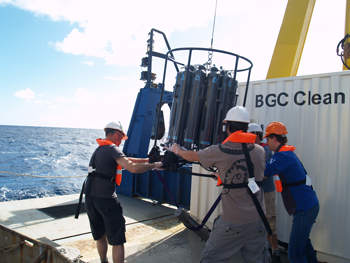 What is the sampling procedure for trace elements in seawater?
Once the TMR is secured, the taps on the full Niskin bottles are immediately covered with plastic bags and the bottles then carried carefully back into the clean container and racked, prior to filtering for the analysis of various trace elements and their isotopes. The clean container laboratory has been specially converted into a trace metal clean environment, with a filtered air system in addition to HEPA filters above the racked Niskin bottles and virtually no exposed metal inside. The scientists working in the clean container wear plastic suits, Crocs and vinyl gloves to further protect the samples from any contamination from the scientists handling the bottles and sampling equipment. The sample bottles used to collect the seawater for trace metal analyses are thoroughly acid washed back in the laboratory on land prior to the cruise, and transported to sea filled with dilute acid. This dilute acid is poured out inside the clean container, then the bottles are rinsed three times with the filtered seawater collected from various depths in the water column, after which the sample bottle can be filled. This all has to be carried out very carefully to ensure that seawater samples remain uncontaminated. It takes approximately one hour to filter and collect samples at a normal station and eight hours to collect all the samples from a mega-station. After the samples have been collected, they are acidified on board to ensure that the metals stay in solution. With a small team of scientists, this means that everyone is working together to process all the seawater samples and continue the deployment of the other equipment such as the McLane pumps and CTD unit, during mega- and super-stations. 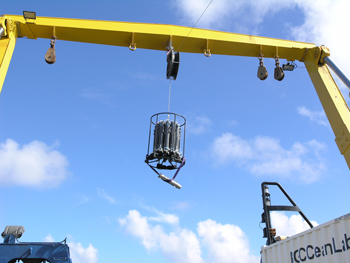 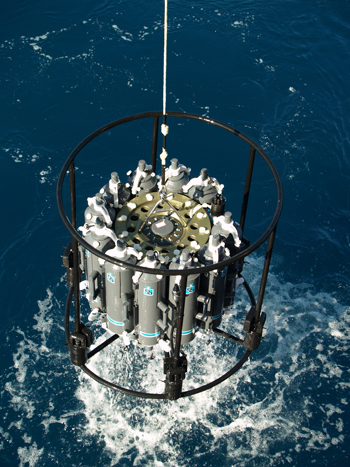 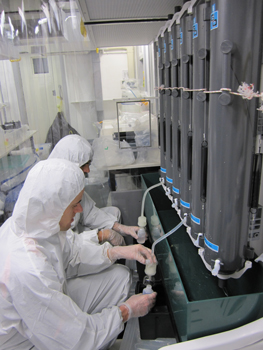