Voyage GEOTRACES GP13 is coming to an end! Today we finished our final station (32.5 oS, 174 oW) north-east of New Zealand, having only lost two stations out of 38 due to bad weather. The ship is now steaming towards Auckland (New Zealand), to rendez-vous with the pilot boat on the morning of Sunday the 5th of June. Fortuitous weather and efficient sampling operations by scientists and crew, meant that we gained one day along the transect, which allowed us to carry out four extra stations farther east into the South Pacific. Over 5000 samples have been collected on our expedition, with teams filtering over some 6000 litres of seawater. At least four hundred thousand meters of wire have been spooled on and off the winches, and several tonnes of seawater have been carried from the laboratories to storage areas in the ship’s hull.

We have a busy day in store when we arrive in Auckland on Sunday. Although our voyage is coming to an end, this is only one leg of a two leg project, with a New Zealand team of scientists continuing farther east along the 32.5oS line of latitude. The number of GEOTRACES scientists in Australia and New Zealand is relatively small, therefore both nations have excellent collaborative relationships which includes the sharing of most major oceanographic equipment and container laboratories for trace element and isotope research. Sunday will therefore be a busy day of craning large crates and containers from our research vessel Southern Surveyor to the New Zealand research vessel Tangaroa. For the Australian team of scientists, the evening will be a chance to enjoy dinner in a nice restaurant and a couple of glasses of New Zealand’s finest sauvignon blanc. 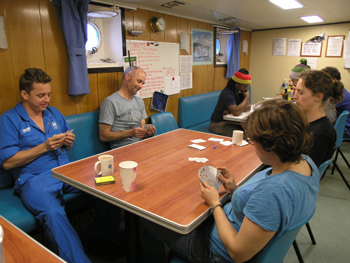 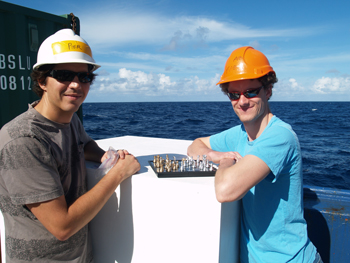 Both work and life on board has been varied throughout our trip. Between shifts there has been time to relax and enjoy our time together on the Southern Surveyor. This has included traditional forms of entrainment such cards and chess. The card game ‘500’ really gained momentum with the ‘night-shift’ team and the game is still on going as we post this! A magnetic chess board has a resounding success, with games in both the ship’s mess and on the back deck whilst the rosette was being deployed! In recent days, calm seas also allowed the pursuit of fishing off the aft deck at stations. Thankfully, the ships cooks did not need to rely on the fishermen for more supplies! Although a couple a squid were successfully hooked after dark, both managed to wriggle away. 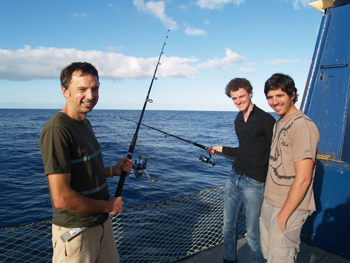 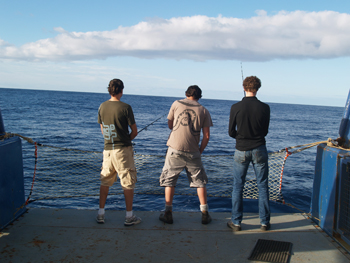 Despite having fun and relaxing between work shifts, we have not forgotten that we on a ship in the middle of the ocean. Muster drills and demonstrations of the ship’s safety equipment were carried out. On one particularly sunny day, scientists were instructed on how to use distress beacons (or ‘flares’), rocket line-throwing equipment and emergency position indicating radio beacons (EPIRBs).

As we watch the sunset on our transit to Auckland, we are all looking forward to our next oceanographic adventure! 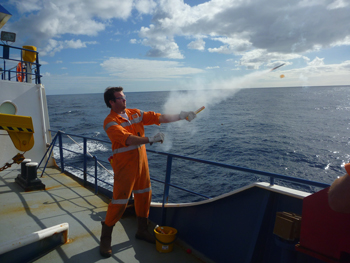 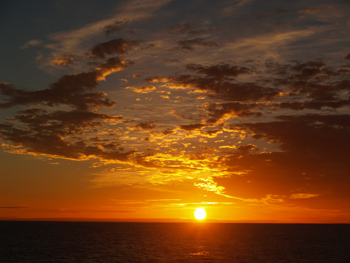