We are now well under way on the GEOTRACES GP13 transect having completed five normal stations and both a mega and a super station. Overall we have successfully carried out all the voyage activities, which includes deploying the CTD, the trace metal rosette, the Mclane pumps and collecting atmospheric dust. This second blog is focused on introducing the first of these operations on the RV Southern Surveyor, the CTD. 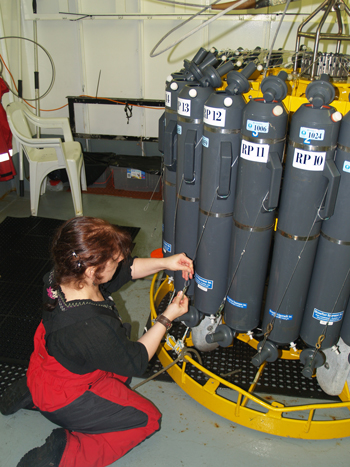 The conventional CTD (conductivity, temperature, depth) is a fundamental instrument used in any investigation of the marine environment, since it characterises the physical oceanography of the region. The CTD is a steel rosette that has a variety of sensors and 10 litre bottles attached, to measure the basic parameters of the water column such as salinity, temperature and depth. Although the focus of GEOTRACES is to measure trace elements and their isotopes, it is essential to determine the regional hydrography using these basic parameters, in order to interpret the biogeochemical processes controlling trace elements distributions, sources, sinks and internal processes. 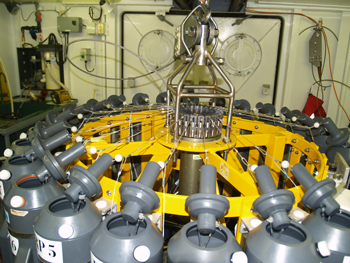 In addition to the Niskin bottles, a variety of different sensors can be attached to the steel rosette. The CTD on board the RV Southern Surveyor has the basic conductivity, temperature and depth sensors as well as; a fluorimeter which measures the chlorophyll fluorescence as an estimate of biomass, a PAR (photosynthetically active radiation) sensor which measures how far the sunlight penetrates the ocean (up to 80 m on a clear day on this voyage), a dissolved oxygen sensor, a transmissometer which measures the turbidity of the seawater due to suspended particles, and an altimeter which points to the seafloor to estimate how close the CTD is to the bottom. 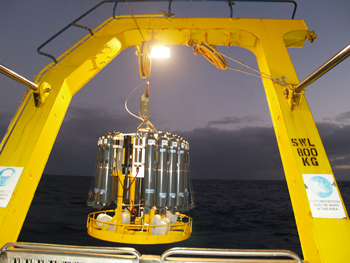 The CTD is deployed from the starboard side of the ship at midships, using a winch system with 7000 m of conducting cable. This cable has a steel casing that protects the copper wires inside, which powers the instrument and carries data from the sensors back to the ship. The Niskin bottles are cocked open using the lanyards and the CTD is winched over the side of the Southern Surveyor. Seawater flushes through the open bottles as the CTD is lowered into the deep ocean. A dedicated operator handles the CTD software, which records the data received by the CTD sensors. This operator analyses the data and identifies which depths of the water column to sample and where to close the Niskin bottles. It can take at least four hours to send the CTD down to ~4000 m depth and bring it back to the surface; so it is important that the Niskin bottles shut at the appropriate depths and don’t leak once they are closed.

Once safely recovered, the Niskin bottles can be sampled for different parameters. The difference between parcels of seawater recovered by the CTD is remarkable, with frosty bottles from the deep with temperatures as low as 2oC compared to 22 oC in the surface waters. The MNF hydrochemists on board, Sue and Pete, sample the water for macronutrients (e.g. nitrate and phosphate) as well as particular organic carbon. Seawater samples are also collected and filtered on board for analysis back in the laboratory, on the diversity of phytoplankton communities. In addition to the biological parameters, ten litres of seawater are filtered and collected from the CTD for analysis of the isotopes of thorium, protactinium and neodymium.

Presently we are near 30oS 161oE, heading to station 10, a normal station, after station 9 was cancelled due to rough weather. In the next blog, we will describe how the trace metal rosette is different from the conventional CTD, and the special procedures and equipment used to deploy the rosette and process the seawater samples.