When we left you last we were on our way to GT4. Since then, we have sampled four more normal stations and we left the next mega station last night. We had to cut it a little short as the wind had picked up and it was not the best weather for a deep trace metal rosette cast or to deploy the insitu McLane pumps. The shallow depths will have to suffice.

Our schedule is tight and we don’t have much room for bad weather, luckily today is another beautiful day at sea. The first ocean acidification experiment finished last night. They are, as I type, starting to sample for the next experiment.

The main scientific purpose of this cruise, as a part of the Geotraces program, is to collect and measure trace elements and their isotopes in the ocean. We are looking to create an inventory of the supply and flux of trace elements, especially iron, to and in the oceans.

Iron is an important micronutrient for phytoplankton in the surface oceans; with some regions being so scarce in iron sources that iron limits productivity, the ocean is anemic. Iron-rich dust that is blown off of arid landmasses is one of the main pathways for iron to reach the surface oceans. Therefore, on this voyage, we are collecting seawater from the trace metal rosette, particulate samples with the insitu pumps, and aerosol samples through a high volume aerosol sampler to identify how much iron is supplied to the surface oceans in this region and try to account for the fluxes of this iron through the water column.

As I’m sure many of you have heard, there was a volcanic eruption in Chile this week and winds have blown volcanic ash as far away as New Zealand, closing airspace between Australia and New Zealand. You can see in the plume map below that the ash should have reached where we are now. Volcanic ash is potentially another important source of iron and other trace metals to the surface oceans. 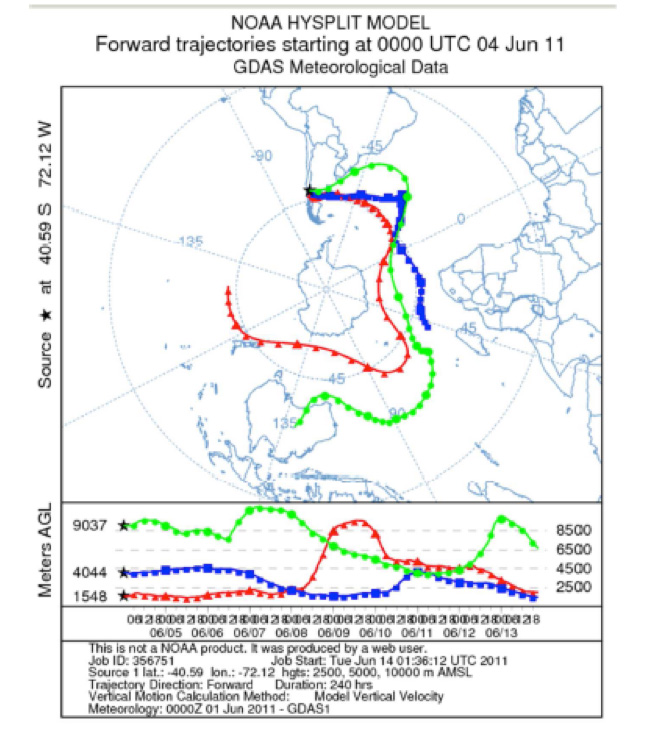 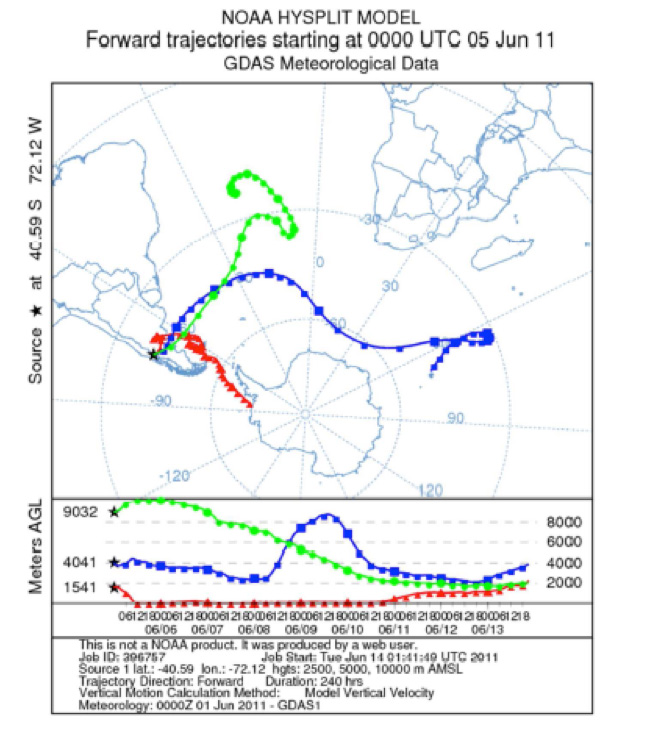 It is important to identify what elements are transported in volcanic ash, whether those elements are harmful or beneficial to productivity and especially how much iron from the volcanic ash is bioavailable. Since we have this rare opportunity to be out on the ocean just after an eruption we are not only collecting aerosols but attempting to collect some rain samples that might help strip the ash out of the atmosphere and deposit it into the surface oceans.

Now that the sun is shining, we will hopefully continue our sampling, making our way through two stations per day, with 15 more to go.