The US GEOTRACES North Atlantic cruise sailed from Woods Hole yesterday morning aboard the R/V Knorr. The cruise will complete the section between Lisbon and Woods Hole that began in October 2010, but which was terminated prematurely due to mechanical problems on the ship. Cruise plans call for a brief stop in Bermuda to exchange samples and personnel before continuing across the basin, anticipating that scientists will disembark in Praia, Cape Verde, on 11 December. 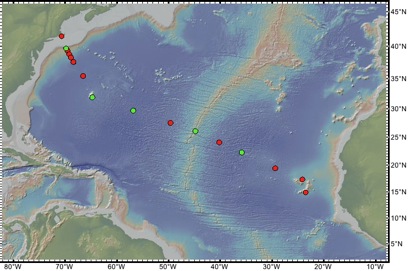 Full depth stations are shown in the accompanying figure. Additional stations to sample for selected trace metals to a depth of 1000 m are not shown. Standard stations are shown in red (as are the ports) and “super” stations, with extra casts to provide large-volume samples for selected parameters, are shown in green. Station spacing is concentrated along the western margin to evaluate the transport of trace elements and isotopes by western boundary currents. Stations across the gyre will allow scientists to examine trace element supply by Saharan dust, while also contrasting trace element and isotope distributions in the oligotrophic gyre with conditions near biologically productive ocean margins, both in the west, to be sampled now, and within the eastern boundary upwelling system off Mauritania, sampled last year.

Submit a GEOTRACES Session at Goldschmidt 2023

The call for Session and Workshop proposals for the 2023 Goldschmidt conference is open until Friday, 14 October 2022.