The U.S. and German Arctic GEOTRACES cruises are now set for departure. The U.S. cruise (GN01) will be sailing from August 7 to October 10 on board RV U.S. Coast Guard Cutter Healy (HLY1502). The German cruise (GN04) will leave port on August 16 to October 15 on board RV Polarstern (PS94). These two cruises, together with the Canadian Arctic cruise (GN02) that left port on July 10, will complete the International GEOTRACES Arctic Programme (see figure 1 below). 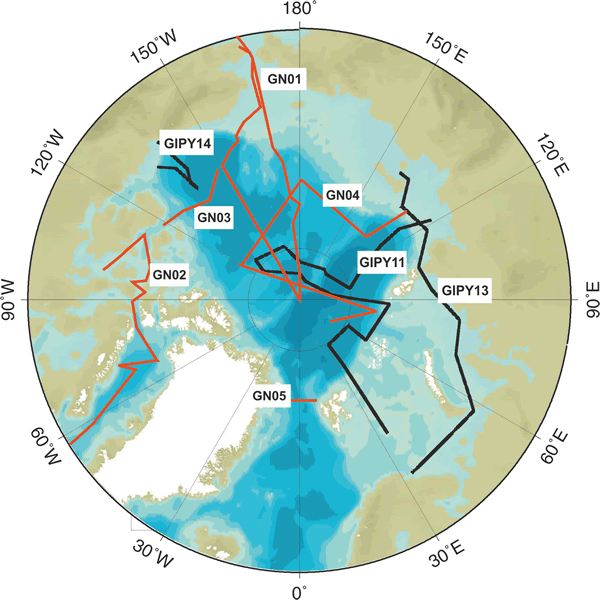 The U.S. GEOTRACES Arctic cruise will leave from Dutch Harbour (Alaska, US). With supplementary stations from the CLIVAR programme, 51 scientists will undertake a transect in the western Arctic (see figure 2 below). Main objectives of the cruise are:

The cruise has a broad outreach programme that includes: (1) Bill Schmoker, a science teacher from PolarTREC, who will be on-board providing blogs and documenting shipboard activities; (2) Community lectures in Alaska and throughout the US; and (3) the “Float Your Boat outreach project” where youths have prepared precut toy boat hulls for deployment as an ocean drifter, to learn about polar currents and Polar Research. 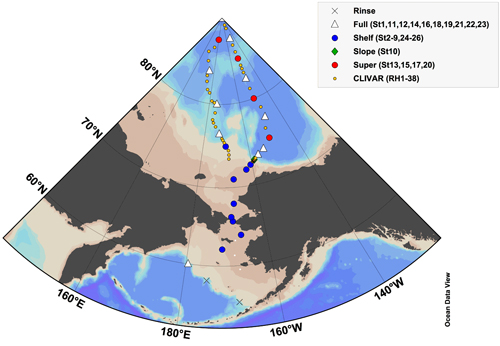 The German GEOTRACES Arctic cruise (TransArc II cruise) will depart from Tromsø (Norway) on and return to Bremerhaven (Germany). Onboard the cruise there will be 49 scientists from 9 countries (Germany, Netherlands, Russia, Sweden, Spain, Denmark, Switzerland, France and United Kingdom). Among the participants, a team of 17 scientists will carry out the GEOTRACES program.

The TransArc II (Trans-Arctic survey of the Arctic Ocean in transition) will capture the current state of the physical, biological and chemical components of the Arctic Ocean in order to assess its changes. While the drastic retreat of the sea ice can be measured through satellites, assessment of all other Arctic Ocean changes needs repeat observations through ship expeditions. Following this strategy, TransArc II will, eight years after the International Polar Year (IPY) 2007/2008 and four years after the first TransArc expedition, conduct the next survey of the thickness and properties of sea ice, of properties and circulation of water masses, of biogeochemical cycles and of ecosystem changes. TransArc II is a contribution to other international programs Arctic ROOS, IABP (International Arctic Buoy Program) and Transdrift, as well as to the national program RACE. TransArc II is also a component of the strategic infrastructure program FRAM (FRontiers in Arctic Monitoring) of the Helmholtz Foundation of German Research Centers.

The GEOTRACES program is part of this larger endeavour. It constitutes a revisit of the area after the study during the IPY 2007 (GIPY11 cruise, see figure 1). It will include some tracers not measured during the previous study, have more emphasis on the analysis of the particulate phase, and it will provide a high-resolution baseline of the trace element and isotope distributions in the Arctic for future evaluation of changes. Comparison with previous data may already provide some insight into the impact of the large changes occurring in the Arctic on the biogeochemical cycles.

The cruise program can be found at
http://epic.awi.de/38460/1/PS94_Expedition_programme.pdf