The UK-led cruise along 40ºS from South Africa to Uruguay (GEOTRACES A10) was successfully completed on 27th January. Twenty-four stations were occupied, with stand-alone pumps and sediment coring frequently adding to the central CTD work of the cruise. All key GEOTRACES parameters were (or will be) measured, along with a wide variety of other geochemical and biological parameters. Scientists from ten UK institutes were joined by a team from the US (WHOI) who conducted measurements of ocean mixing, and a team from Slovenia measuring mercury concentrations and speciation. The section was completed on board the RRS James Cook, funded by the UK funding agency, NERC, and the principal scientist was Gideon Henderson (University of Oxford). 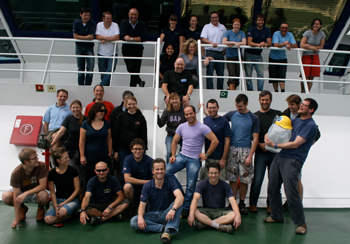 Figure: The UK-GEOTRACES team on the RSS James Cook.

View the videos from the IDP2021 webinar launch and use IDP2021 extensively! 😉