The goal of SIPEX-2 was to improve our understanding of key processes that control the productivity of the climatically-important seasonal ice zone (SIZ). Consequently,  samples were collected for two kinds of analyses: i) micronutrients AND trace metal (TM) clean samples from the sea ice and underlying water column in East Antarctica for subsequent analysis at the ACE CRC in Hobart (Australia) and ii) macro-nutrients, Dissolved Organic Carbon (DOC), Particulate Organic Carbon (POC), and sea ice thermodynamics (ice texture, temperature, salinity and brine volume fractions). An important part of this work was also to assess regimes of production on the sites dedicated to TM sampling on the field. This was made possible by using stable isotope (13C-DIC, 15N-NO3-, 15N-NH4+, 30Si-DSi) in situ incubation experiments in the field, with subsequent analysis at the Vrije Universiteit Brussel (Belgium). A large number of samples for δ15N-nitrate analyses (VUB – Belgium) were collected on the ice-stations and also from each trace metal rosette (TMR) and CTD deployment to describe the system functioning using this main qualitative N-production tool.. 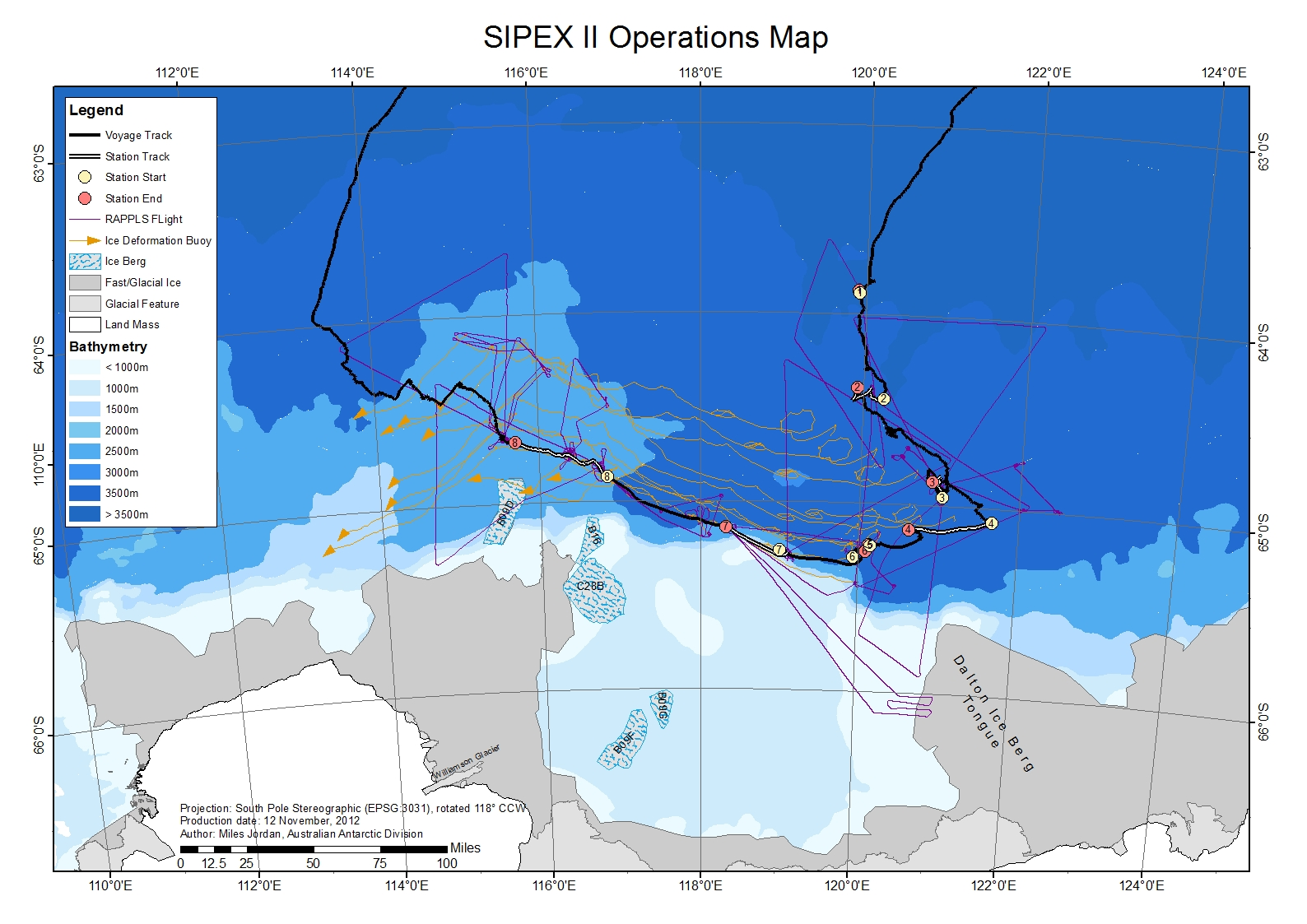 Work plan
A common work plan was applied to all the ice stations visited by the RV Aurora Australis between the 26th of September and 29th of October 2012 (62-64°S, 116-120°E). Our sampling area would typically be set up a few hundred meters ahead of the ship, which was oriented facing the wind, to limit potential trace metals atmospheric contamination. For the same purpose, each of the participants wore clean room garments on top of their Antarctic clothes.

Snow, sea ice, brines and under-ice seawater were sampled for multi-parametric analyses. Sea ice thickness and temperature were measured in situ. Ice sections, snow, brines and seawater were filtered onboard for nutrients, DOC, POC and Chla determination. While Chla concentrations were measured onboard, the rest of the processed samples were preserved for further analyses in Hobart. Granular (frazil and/or snow ice) and columnar ice textures were determined onboard from thin ice section photographs taken under polarised light. Ice cores dedicated to trace element analysis and laboratory-based experiments were shipped to Hobart.

Production work was done as close as possible (<10 m) to the site for TM sampling. A first ice-core was taken to estimate ammonium and nitrate concentrations and thus the amount of spike to add (sample processing: ice-crushing, subsampling, reagent addition, measurement via fluorometer or spectrometer). Then ice cores (3) dedicated for incubation experiments were collected and processed before the finalised incubation bottles (1L bottles containing layer corresponding crushed ice + stable isotope spikes) were replaced on site using plexi tubes or plastic bags for a duration ranging between 9 and 24 h (weather and ice conditions dependant). On the ice station, samples for δ15N-nitrate analyses were collected following the current type of ice-core slicing used by the bio-teams.

In addition to the sea ice work, trace metal samples from the water column down to 1000 m were obtained using a TMR system. The 12 X-Niskin bottles were tripped at standard depths following recommended GEOTRACES protocols.  Both filtered and unfiltered samples were taken under an ISO class 5 trace-metal-clean laminar flow bench in a trace-metal-clean laboratory container on the ship’s trawl deck. Samples will be analyzed for standard trace elements in the laboratory in Hobart using a resin extraction and ICPMS technique. At select stations, Fe(II) was measured on filtered samples employing the luminol method.

Preliminary results
As stated above, most of the analyses will be performed in Hobart and Brussels. However, some encouraging preliminary results are worth putting forward. Sea ice thickness at our selected sampling sites ranged from 0.57m (station 2) to 1.36m (station 6) in thickness. The cores collected for TM analysis are however not representative of the sea ice thickness encountered during SIPEX2, which appeared >2m thick and highly rafted. Very cold ice with a strong temperature gradient was measured at station 3, whilst relatively warm ice was observed during the rest of SIPEX2. The salinity profiles almost always show higher salt contents in surface sea ice, suggesting the formation of snow ice (mix of melted snow and seawater). Unlike previous studies in the area, Chla maxima were not systematically observed in the basal ice. Relatively high Chla concentrations were measured in the surface and internal sea ice, suggesting sea ice conditions there were favourable to autotrophs.