The GEOTRACES Mediterranean Section (GA04) will be realized thanks to a collaboration between Netherlands and Spain. Samples will be collected from the first of May until the mid of August, on two oceanic research vessels: the Pelagia (GA04-N) and the RV /Ángeles Alvariño (GAO4-S).

Both cruises are described below

MEDBLACK: RV Pelagia in the Mediterranean Sea and the Black Sea

The objective is to elucidate important biogeochemical processes, sources and sinks that determine the distribution of bio-essential and other trace elements in the Mediterranean Sea and Black Sea. As dust is a main transport pathway of bio-essential trace elements to the surface of the open ocean the heavy Saharan dust impact on the Mediterranean Sea is ideal to investigate the effect of dust on the biogeochemical cycles of trace elements and isotopes. The Black Sea is the largest anoxic basin of the world and forms an ideal natural laboratory to unravel the microbial driven reduction and oxidation reactions of trace elements and isotopes.

Scientists on the NIOZ research vessel Pelagia will take samples to determine the distribution of the GEOTRACES TEIs and many other trace elements that necessitates trace metal clean sampling (Figure 1). A large volume non trace metal clean CTD system allows for sampling of many additional parameters. The cruise is cooperating with the Geotraces program to cover the section GA04, in combination with a UAB cruise on board the RV Ángeles Alvariño (GA04-S).

Figure 1. The Dutch research vessel Pelagia and the PRISTINE® sampler (made of ultrapure PVDF and titanium)

The cruise track of the RV Pelagia will cover the whole Mediterranean basin as well as the Black Sea and is divided over three legs, figure 2.

Figure 2. The cruise track of RV Pelagia in the Mediterranean Sea and the Black Sea in 2013.

The RV Pelagia will leave the island of Texel (The Netherlands) on 7 May 2013 and sail to Lisbon (Portugal) where it arrives 15 May. The first MEDBLACK leg starts 16 May from Lisbon and will sample 4 stations in the northeast Atlantic Ocean followed by a long west to east section in the southern Mediterranean Sea with a final port call in Istanbul (Turkey) on 6 June. Research leg 2 departs from Istanbul on 12 July for a 9 days research cruise in the Black Sea. Research leg 3 leaves Istanbul on 22 July to sample stations in the south Adriatic and then west off Italy into the Gulf of Lyon with a final port call in Lisbon on 11 August.

Port of Departure: Texel ( the Netherlands)

On the other hand, the cruise is cooperating with the Geotraces program to cover the section GA04, in combination with a NIOZ cruise on board the Pelagia (GA04-N). Both cruises will take samples to determine the distribution of the GEOTRACES TEIs and many other parameters. While Pelagia will focus on trace element sampling that necessitates trace metal clean sampling system, Ángeles Alvariño will collect those samples that require large volumes of water. 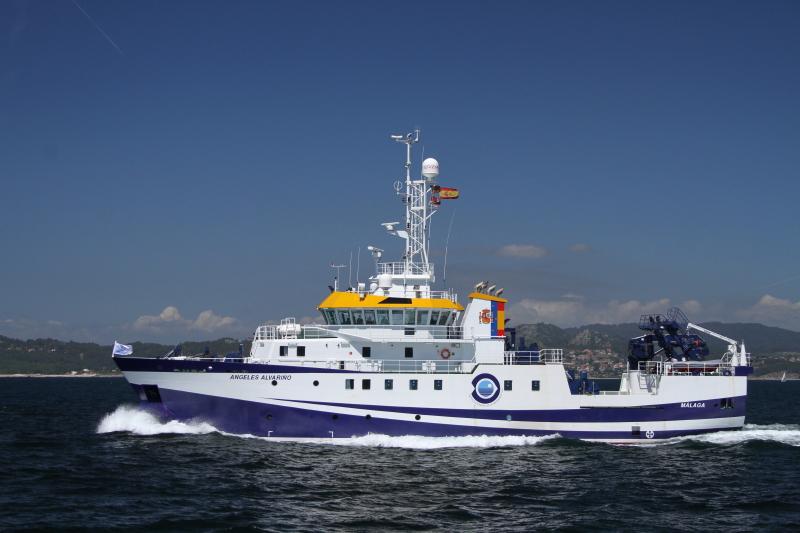 The cruise track of the RV Ángeles Alvariño will cover the whole Mediterranean basin and is divided over two legs, Figure 2.

Figure 2. The cruise track of RV Ángeles Alvariño in the Mediterranean May 2013.

The RV Ángeles Alvariño will depart Cadiz (Spain) on 2 May 2013 and will cover 16 stations on the first leg in the southern Mediterranean Sea. After the first leg, approximately on May 18th, the cruise will enter the harbor of Heraklion (Crete, Greece). The second leg will start on May 19th and cover the northern Mediterranean Sea. During the cruise we will collect water samples at 26 stations. We also plan to collect sediments and perform incubation experiments at 4 selected stations.