KEOPS2 is an international (France, Belgium, Australia, Chili, South Korea, UK, USA) and multidisciplinary project that studies the impact of natural iron fertilization on ecosystem and biochemical cycles in the Southern Ocean. The KEOPS2 cruise (8 Oct. – 30 Nov.) is now successfully completed. 359 deck operations were performed on the R/V Marion Dufresne during 36 occupations of stations located mainly east of Kerguelen Island (Indian Southern Ocean). Real time satellite images (chlorophyll and altimetry) in combination with trajectories of 50 drifters released during the first part of the cruise were used to carefully decide the positions of the stations. Samples were collected in the entire water column and in the superficial sediment.

KEOPS2 included a GEOTRACES process study. In this context dissolved and particulate samples for the determination of trace elements concentrations and for isotopic composition analysis have been collected during 30 deployments of a trace metal clean rosette, 15 deployments of in situ pumps and 7 deployment of a multicorer.

This unique data set will allow describing the vertical and horizontal distributions of trace elements in this region. The different sources of iron will be identified. The nature and the time scales of the processes that are supplying or removing iron will be investigated. The GEOTRACES study combined with other approaches (physics, biogeochemistry, biology) conducted during KEOPS2 will contribute to improve our understanding of the functioning of the biological pump of CO2 in the Southern ocean and its response to iron fertilization. 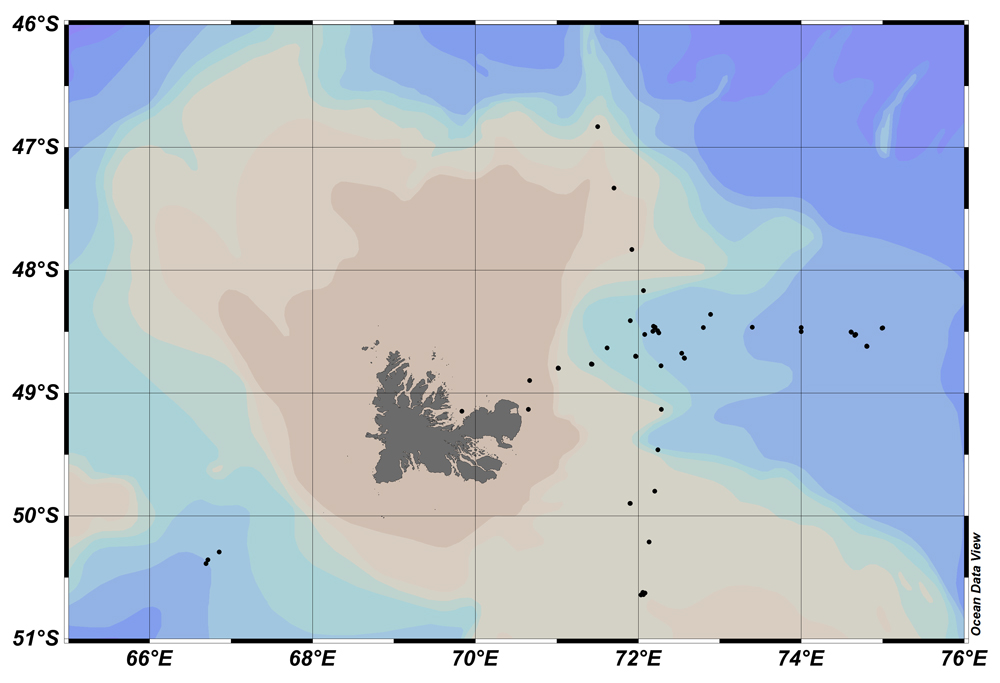 Figure: Black dots denote the positions of the stations occupied east of Kerguelen island during KEOPS2.