The joint Australia-New Zealand GP13 cruise is now successfully completed. This cruise undertook a 61 station (38 by Australia and 23 by New Zealand) transect along ~30oS east of Australia out into the South Pacific and terminating at 32.5oS 150oW (i.e., South of Tahiti). The sampling included three crossover inter-calibration stations (at 172, 171 and 170oW) that were sampled on both legs. Aerosol samples were also taken on both legs with 14 samples along the transect.

A cruise blog was maintained along on both legs of this voyage with thirteen blogs posted. SCOR sponsored the participation of a South African scientist on the Australian leg of the cruise. 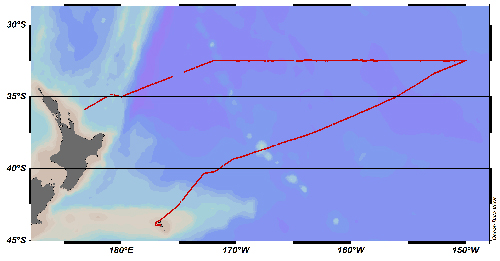 This project is the first time that data on the distribution of many trace elements and their isotopes along the GP13 section in the Tasman Sea and southwest Pacific has been collected, and the 14 deep water deployments (to over 5 km) will be a welcome addition to the archive of the few deep profiles that presently exist in any ocean basin worldwide.

Preliminary results from the Australian shipboard analysis of dissolved Fe indicate that the western end of the transect had extremely low concentrations of dissolved Fe, despite the proximity of sampling to the continental shelf and possible dust deposition sources. Upper mixed layer nutrient concentrations were below macromolar detection limit at all stations along section GP13, with typical increases below the mixed layer. On the New Zealand leg, nitrate was typically <10 nmol L-1, and there was evidence of residual phosphate. Based on the maximum quantum yield (Fv/Fm), phytoplankton east of 170oE were nutrient limited, but higher values (in some cases close to the theoretical maximum for picocyanobacteria) were observed in the deep chlorophyll maximum. Complementary studies on the voyage will indicate the degree of iron and nitrogen co-limitation in these waters.