The GEOTRACES-India cruise onboard Sagar Kanya (SK 338, GI10) was started on January 28, 2017 from Chennai and ended on March 3, at Goa. During 35 days samples of water, sediments and aerosol have been collected in the Bay of Bengal, the Andaman Ocean, the Indian Ocean and the Arabian Sea in 25 sampling stations.

In general, cruise was successful and most of the objectives of the cruise were met, as follows:

1) Sampling has been done on 25 stations during the cruise SK338.

2) A total 51 clean casts have been done during the cruise time to study biogeochemical cycles of trace elements and their isotopes.

3) McLANE is operated successfully 12 times (at 5 stations) to collect the particulate matter.

4) Continuous aerosol sampling was done while ship was on move.

Onboard analysis of parameters:

1) Basic parameters like pH, Salinity, Alkalinity and dissolved oxygen analysis have been done onboard.

2) Ammonia, Nitrate, Nitrite, Silicate and Phosphate have been measured onboard.

3) Dissolved Zinc in the seawater has been analysed onboard using Zn-FIAS system by Fluorometric detection. 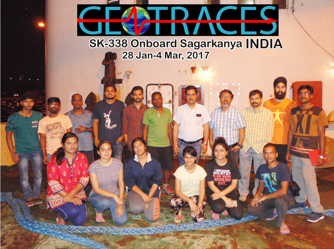 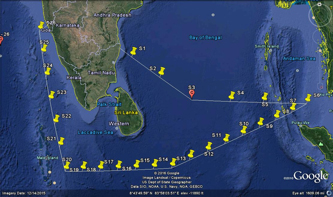