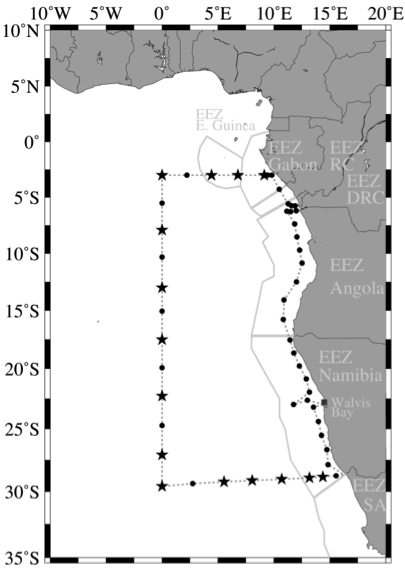 The German RV Meteor cruise M121 (GEOTRACES section GA08) departed from Walvis Bay (Namibia) on November 22st and will return to Walvis Bay on December 28th. There will be 28 scientists on board, mainly working groups from Germany (GEOMAR, Jacobs University and MPI Bremen), the U.K. (Oxford), and two guests from Angola. Chief scientists are Martin Frank and Eric Achterberg from GEOMAR in Kiel.

On this cruise we will investigate the full water column distribution of dissolved and particulate trace metals and their isotopes (TEIs) along a near shore and an offshore N-S section in the Angola Basin and the northernmost Cape Basin. These are complemented by two E-W sections perpendicular to the coast at 3°S and 30°S. We will for the first time use the newly acquired trace metal clean rosette and mobile winch of GEOMAR. One of the main scientific goals of the cruise is the detailed investigation of the impact of continental inputs on the TEI distribution, such as exchange with the SW African margin, dust input from the Namib desert, and the influence of the dissolved and particulate input of the major Congo and Orange rivers. Together with the nitrogen cycle we will also investigate the biogeochemical cycling of the TEIs within the Benguela Upwelling and its controlling factors. Finally, the relationships between the distributions of the TEIs and the large and small scale ocean circulation will be subject of study, which will allow an evaluation of the suitability of particular TEIs as water mass tracers in the Angola Basin.