The latest Japanese GEOTRACES cruise (KH-14-6) of R/V Hakuho Maru will depart on Tuesday 2nd December from Tokyo (Japan) with the aim of establishing the first meridional profiles of GEOTRACES trace elements and isotopes (TEIs) in the South Pacific. On board of the cruise 52 Japanese scientists, technicians, and students, including 6 graduate students from other countries (China, Korea, Brunei, and Austria) will sail along ~170°W in the southern Pacific (GEOTRACES GP19 section).

This cruise will allow extracting important information on the biogeochemical cycles of TEIs and their roles in marine ecosystems, associated with the northward Antarctic Bottom Water which plays a key role in dynamic deepwater convection. In addition,  data from this cruise will be compared with data obtained from a similar cruise held in 2004-2005, revealing any decadal changes in physical, chemical and biological parameters in the western Pacific.

Another important target of the cruise will be to study the submarine hydrothermal activity in the Mariana arc-backarc zone as a significant source of trace metals from lithosphere to seawater.

The cruise will consist of 4 legs: leg-1 (from Tokyo to Wellington), leg-2 (from Wellington to Auckland), leg-3 (from Auckland to Majuro), and leg-4 (from Majuro to Tokyo). It will return port on 26th February 2015. 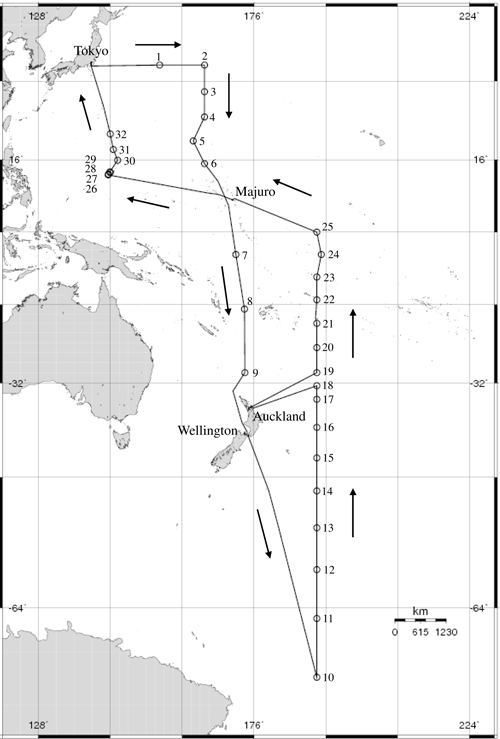