The KH-14-6 cruise, nicknamed as “GRUS Expedition”, has been conducted between December 2, 2014, and February 26, 2015, in the Pacific Ocean including the Antarctic Sea. The main purpose of the cruise is to establish the 2-dimensional profiles of trace elements and isotopes along the 170°W line (see figure below).

The cruise consisted of four legs, the leg-II (8 stations from GR-7 to GR-14) and the leg-III (7 stations from GR-15 to GR-21) of which were assigned for the GEOTRACES program. Water samples were collected from surface to near bottom by using a clean CTD Carousel Multi Sampling system (24 Niskin-X (12L) bottles) attached at the end of a Ti-armored cable. We occupied two stations, GR-6 (30°S, 174°E) in Leg-I and GR-13 (32°30’S, 170°W) in Leg-II for the purpose of inter-comparison with the data obtained by a previous Australian GEOTRACES cruise. 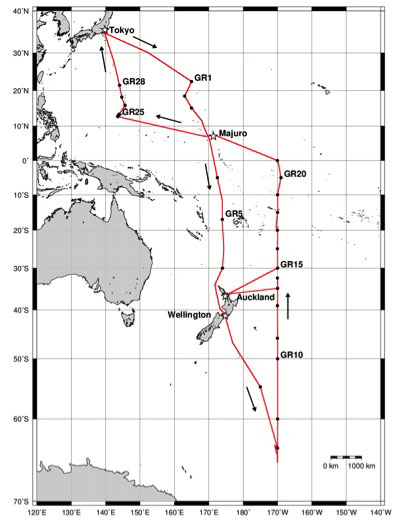 She will receive the 2020 John Hayes Award from the Geochemical Society.

Impressive number of datasets submitted by the final IDP2021 deadline

More than 2,760 datasets have been registered in DOoR by the final deadline of December 15, 2020.